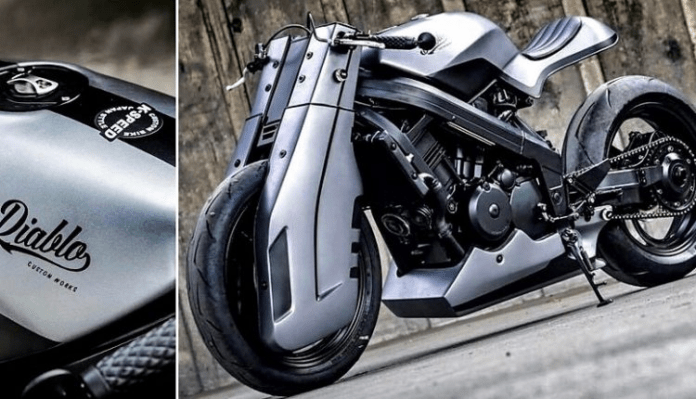 The design of the Honda Bros 400 was nowhere like what one would anticipate from a showpiece. This unique futuristic cafe racer was created by K-Speed using street fighter themes that are subtly incorporated into parts of its design lines. K-Speed painted the stock frame, wheels, and swing-arm black to provide the perfect contrast with the silver-finished, custom-built body panels before making any claims regarding the parts. With merely a broad wheel and chain components painted in black, the rear area appears to be somewhat barren. K-Speed Bros 400 is a single-seater by nature and has a well-designed tail light.

Fans may check out the massive under-engine fairing, which nicely complements the size of this bike. The utilisation of a hand-built frame to hide the front suspension and give the bike a futuristic stance is the most astonishing feature of all. On top of this frame, it has an LED headlight attached. The instrument console was missed as the clip-on handlebars emerged securely from the front frame that was specially made. Everything feels properly suited to one another because the fuel filler also has a distinctive layout. On the lower right side, it is easy to discern those two exhaust pipes.

The donor bike was created about three decades ago, and as a result, the design aesthetic at that time was very different from bikes today. The standard Bros 400’s 389cc, twin cylinder engine produces 34.5 Nm @ 6500 rpm and 37 PS at 8500 rpm. The Honda Bros 400’s engine is paired with a 5-speed transmission. It had a sizable 19.5-liter gasoline tank when it was new, but K-Speed appears to be using a somewhat smaller tank behind the fairing. While this customised version only offers a single leather-wrapped seat, the base version allows you to travel with a passenger. It enters the fuel tank with excellent flow.