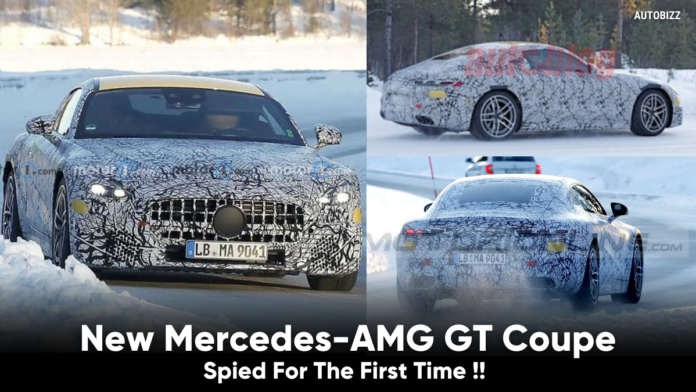 The Mercedes-AMG GT Coupe was apparently phased out of manufacturing in December of last year, following nearly seven years on the assembly lines. This isn’t surprising, given that Mercedes-Benz has a new generation SL, which will evolve into the next-generation AMG GT Coupe. We’re excited to share the first spy photographs of this new model with you.

A disguised prototype was spotted by our spies testing on public roads in icy Sweden. The test car is dressed in what appears to be the final production body, with a bright yellow exterior paint peeking out from behind the cover. These don’t appear to be production headlights, but based on the new SL, we can fairly guess how they’ll look.

Not everything in terms of design will be identical between the two cars, though. Rumors suggest the AMG GT Coupe will feature a more aggressive design with influences even from the One hypercar. Due to the camo, we can’t see much of these visual tweaks yet and we are excited to discover what’s hiding under the thin foil.

Looking at the back, the overall layout seems very similar to the SL but we suspect there might be changes to the lower section of the bumper and the diffuser. Whereas the SL has more rounded and softer lines, we expect the AMG GT Coupe to feature sharper and more edgy shapes. The overall profile should be almost identical, despite the hard top of the coupe compared to the soft top of the roadster.

There’s no official word from the automaker about what will power the upcoming AMG GT Coupe, but it seems that the overall consensus is that the SL’s 4.0-liter V8 will be among the available options. Depending on the trim level (55 or 63), it could deliver up to 585 horsepower (430 kilowatts). An even more powerful, electrically-assisted version of that powertrain could also be in the cards with a mind-blowing output of over 800 hp (588 kW).