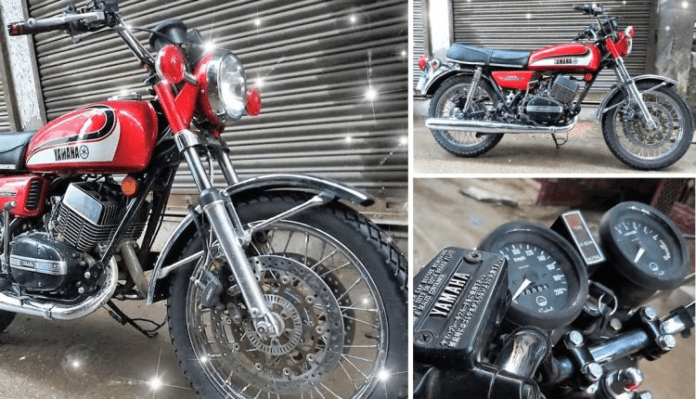 When an owner by the name of Jassi fitted his beloved property with dual front disc brakes, one rear disc brake, and single-channel ABS, the legend of the Yamaha RD350 gained another level. Front and rear drum brakes were an option for the RD350’s India-spec model, but this owner-installed modification has eliminated this disadvantage. The Suzuki motorcycle served as the source for the single channel ABS device. In the upcoming weeks, Jassi intends to employ a superior twin channel unit on his RD350.

For greater overall value, the 1983 model shown here has no engine modifications. Everything is in its stock state. The owner has extensive knowledge of both minor and significant modifications that can be done to the motorcycle as he restores RDs. The Honda CBR650F, which is far more potent, sports Nissin Calipers and Brembo brakes up front. The degree of modification is so great that hydraulic clutch from the Suzuki Hayabusa and brake cylinders from the Yamaha V-Max were employed. This particular motorcycle is red with white accents and chrome fenders.

A 347cc, twin-cylinder, two-stroke engine powers the Yamaha RD350, delivering 32.3 Nm at 6500 rpm and 30.5 BHP at 6750 rpm. The engine is paired with a 6-speed transmission. The variant that was offered in Japan has the same engine but gives the rider a maximum output of 39 BHP and 37.2 Nm. It is more potent than the Yamaha R3 of the current generation due to the overall output. Many riders claim that the 155 kilogramme motorcycle can reach a top speed of more than 150 kph. The majority of experts compare the Yamaha RD350 to the KTM 390 Duke of its day.