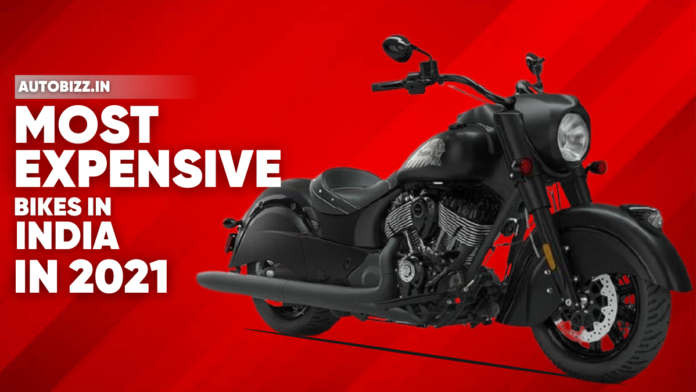 Even though motorcycles aren’t necessarily seen in the bracket of expensive items and it’s mostly cars that take the top spots there. However, some motorcycles stand out as exceptions as they cost a lot more than one would normally imagine. Here, we’ve rounded up some of the most expensive motorcycles in India, and to start with, all of them cost more than the popular German luxury car models.

Top 5 Most Expensive Bikes In India

The Kawasaki Ninja H2R, which is the track-focussed version of the Ninja H2 finds its place among the most expensive bikes that you can purchase in India. Powering this motorcycle is a 998cc, four-cylinder engine mated to a six-speed transmission. The unique supercharged motor develops a whopping 306 hp of power along with 165 Nm of torque. The Kawasaki Ninja H2R will set you back by Rs 80 lakh (ex-showroom, Delhi), same as a Ford Mustang but a whole lot faster, although both are an apple and grape comparison.

The M RR is the first M model from BMW Motorrad. Its genes come directly from professional racing. The M RR and M RR with M Competition package offers pure racing technology for the highest performance demands in motorsport. And yes, before you ask, it is road legal, unlike the HP4 Race. The BMW M 1000 RR doesn’t look radically different from the S 1000 RR. After all it is what the bike is based on. The M RR gets aero elements in form of winglets and there is extensive use of carbonfibre and therefore was launched in india at a price tag of Rs. 45 lakhs.

The Indian Motorcycle Roadmaster is an expertly crafted, powerful and well-balanced touring bike, fully loaded with the most extensive package of touring amenities that Indian Motorcycle offers. It is powered by the same 1811cc V-twin engine which is used in the Chief Classic, Vintage and the Chieftain. The bike costs about 43.21 lakh in India.

With its harder edges, sharper lines, and blacked-out design, the fully loaded Indian Roadmaster Dark Horse is a masterfully made touring bike. A six-speed transmission and standard wet clutch delivers the power to the rear wheel via a tough, carbon-reinforced belt final drive, and at redline can expect a top speed of 185 kmph. The bike costs at a price of 31 lakh INR ( Ex – showroom ).