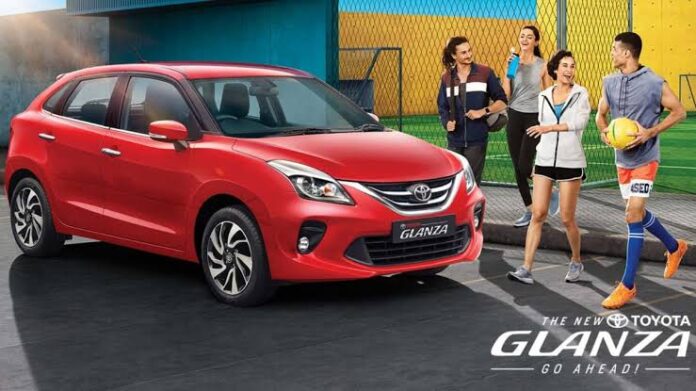 The new-generation Glanza hatchback has been unveiled by Toyota Kirloskar Motor (TKM), and prices start at Rs. 6.39 lakh and go up to Rs. 9.69 lakh (ex-showroom, Delhi). The new Glanza offers a sportier design language than its predecessor, as well as a slew of additional features, enhanced aesthetics, and a more fuel-efficient engine. Under the Suzuki-Toyota cooperation, the new Toyota Glanza is a rebadged Maruti Suzuki Baleno, but the company has gone the extra mile to give the Glanza its own distinctive character this time around. Bookings for the new Glanza have been open for some time, and deliveries are expected to start soon.

The Toyota Glanza 2022 features a larger grille with a chrome accent in the centre. With C-shaped chrome inserts and a large air inlet, the bumper takes on an angular appearance. LED DRLs are installed in the swept-up headlamps, and strong haunches are added to the bonnet for a dynamic aspect. The silhouette is similar to the Baleno, but the rear receives C-shaped LED taillights similar to the hatchback. The model is equipped with alloy wheels that are 16 inches in diameter.

The cabin has been carried over from the Baleno and now features a 9-inch SmartPlay Pro Plus infotainment system, which is larger and more advanced than the Baleno’s. The new model supports Apple CarPlay and Android Auto, as well as more than 40 connected car functions. Alexa help, a head-up display (HUD), an Arkamys-tuned sound system, a 360-degree view camera, rear AC vents, and more are all available from Toyota. The 1.2-litre K-Series petrol engine provides power. The VVT motor produces 88 bhp at 6,000 rpm and 113 Nm of peak torque at 4,400 rpm and is mated to a 5-speed manual transmission and an AMT.

Toyota offers a three-year/100,000-kilometer guarantee with the option of upgrading to a five-year/220,000-kilometer warranty. The company also provides regular service in under 60 minutes via EM60, as well as Roadside Assistance and other services. The Hyundai i20, Tata Altroz, Honda Jazz, and Maruti Suzuki Baleno will all be competitors for the new Toyota Glanza.