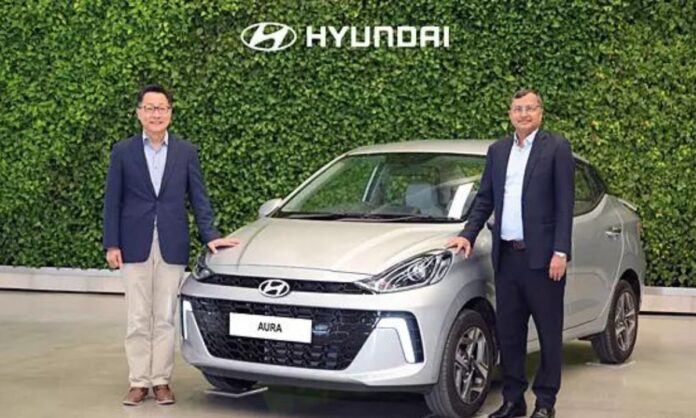 Hyundai India has introduced the Aura facelift, with pricing beginning at Rs 6.30 lakh (ex-showroom). The redesigned Aura is available in four models and six monotone colours, as well as a petrol and CNG powertrain.

The 2017 Hyundai Aura has a reworked front bumper with a bigger and wider bumper-integrated grille and new vertically positioned DRLs. Furthermore, the Aura is also available in a new exterior colour called Starry Night.

The Aura’s interior includes new seat upholstery and a revamped analogue instrument cluster. Aside from that, the Aura retains an eight-inch touchscreen infotainment system, a wireless charger, cruise control, automatic headlights, and a height-adjustable driver seat.

The Aura comes standard with four airbags, while the top-spec SX (O) variant comes with six airbags. A tyre pressure monitor, hill-start assist, and a reverse parking camera with sensors are all standard on the Aura.

The pricing of the Hyundai Aura facelift are shown below by variation.

The following are the variant-wise prices of the Hyundai Aura facelift.

Abarth 500 Electric Hot Hatch Is Reportedly In The Works