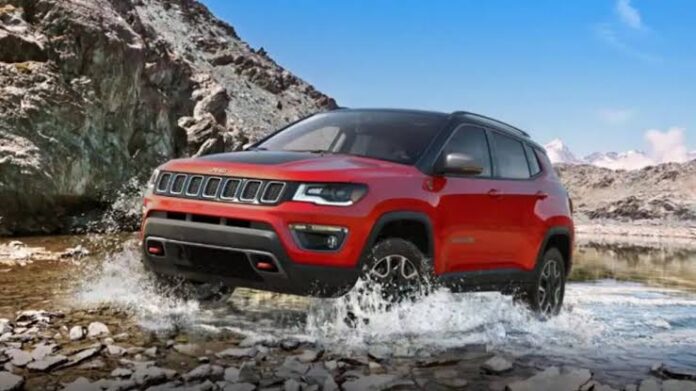 In our market, the Jeep Compass Trailhawk has been reintroduced to the Compass lineup. The starting price of the 2022 Trailhawk is Rs 30.72 lakh, which is Rs 1.38 lakh more than the top-spec Model S model of the current Compass, which costs Rs 29.34 lakh (all-prices, ex-showroom, India). In addition to its usual off-road gear, the new Trailhawk gets the visual and functionality updates from the Compass redesign that debuted last year.

The revised Trailhawk has more sharply cut bumpers for improved approach and departure angles, as well as the redesigned headlights and grille from the Compass facelift. A bonnet decal, smaller 17-inch alloys with 225/65 R17 “all season” tyres, higher ride height, scuff plates, a red tow hook at the back, ‘Trail Rated’ badges on the fenders, and the Trailhawk emblem on the hatch distinguish the Trailhawk as the more serious off-roader. On the interior, the 2022 Trailhawk is noticeably better than its predecessor, adopting the current dashboard layout of the facelifted Compass. The contrast red stitching and ‘Trailhawk’ badges on the seats, on the other hand, indicate that this is the SUV’s special edition.

The Trailhawk’s ride height has been increased an inch to 205mm, which, along with a re-profiled front bumper, offers it a better approach angle of 30 degrees compared to 16.8 degrees on the normal vehicle. The ramp break over and departure angles are 24 and 34 degrees, respectively, compared to 22.9 and 31.7 degrees for a conventional automobile. The 20:1 low ratio, like on the conventional vehicle, may make approaching rough terrain simpler, and on the Trailhawk, it’s supplemented with an extra ‘Rock’ drive option above the regular Compass, which was previously available on the previous Trailhawk. Full underbody protection plates, narrower 17-inch rims for enhanced sidewall protection, mud and snow tyres, and more come standard on the Trailhawk.

A 170hp 2.0-litre diesel engine is still available in the Trailhawk. Four-wheel drive and a 9-speed torque converter automatic transmission are also standard. The normal Compass, on the other hand, has a 6-speed manual transmission and a 4×2 combination for the diesel. Then there’s the 163hp 1.4-litre turbo-petrol with 4×2 drive and either a 6-speed manual or 7-speed DCT auto transmission.

There’s also a 10.25-inch digital instrument cluster, LED projector headlights, LED fog lamps, auto-dimming interior rear-view mirror, rain-sensing wipers, 360-degree camera, and a panoramic sunroof (now standard). More crucially, the Trailhawk now has vented and powered front seats, as well as a driver’s side memory feature. Power seats were oddly absent from the previous Trailhawk, despite the fact that they were offered on the regular SUV.

Would you rather have a Compass Trailhawk than a standard Compass? Do let us know your thoughts