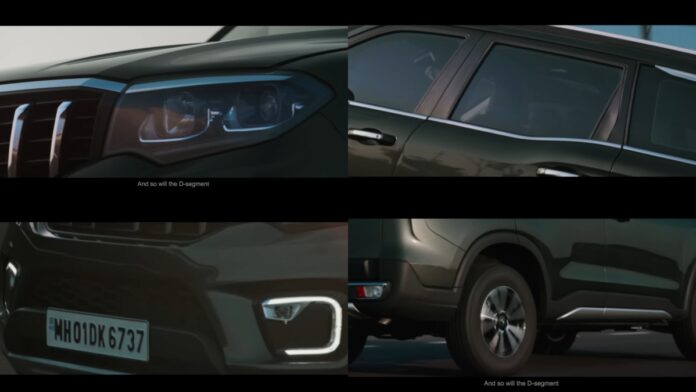 The new Mahindra Scorpio model took a long time since it was under testing. Many buyers were waiting for its launch in India since. Mahindra is recently preparing the product launch to soon take place. Here are some of the images of the new model with no camouflage.

The new Mahindra Scorpio is spied with the old brand logo. There might be chances that the model on sale would get the new logo. The looks of the new model take inspiration from the current model. This model looks very much similar to the Mahindra Alturas G4. Mahindra took a very long time to test Scorpio and finally the design is in production. The new model would offer new LED projector headlamps and projector fog lamps.

Mahindra Scorpio’s new model takes inspiration from XUV700. The chrome lining near C-Panel is what even the XUV700 also uses for looks. Many Scorpio lovers would still miss the old model which will still remain on sale. The older model will get some minor tweaks and some other updates. There is a new set of alloy wheels on offer which catches eyeballs a lot. The Interior will be revealed during the official product launch. A lot of features would make their way with the new model over the older generation. Mahindra will offer a lot of equipment like a 360 Camera and Adrenox with Alexa voice command. There would be only a normal sunroof on offer as a Panoramic has its reservation with XUV700.

Safety was a major concern for the older model. It’s an expectation that the new model will get better build quality and safety. Mahindra showcased the Mstallion range during Auto Expo 2020. There will be a 2.2-liter diesel engine and a 2-liter Mstallion petrol engine on the offer. The car will take over the likes of Hyundai Alcazar and Kia Carens. Scorpio lovers will contribute a lot in sales due to a huge fanbase. Many fans will surely pick the car for its name. A four-wheel-drive option will also be available to the customers.