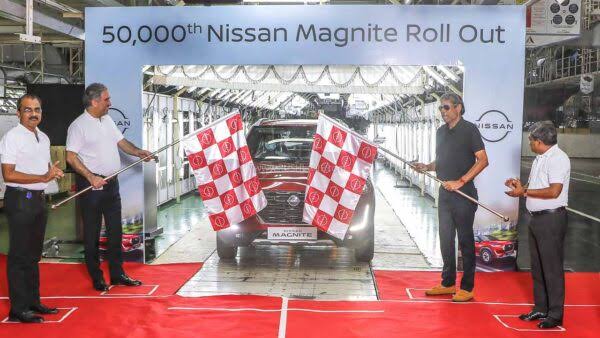 Nissan’s Oragadam facility near Chennai has produced the 50,000th unit of its Magnite SUV. The made-in-India Magnite SUV, Nissan’s turn-around product for our market, is being marketed not only locally but also in over 15 foreign countries. The Magnite first went on sale in December 2020, and because to its aggressive starting price of Rs 4.99 lakh, the SUV has been essential in increasing footfall at Nissan showrooms since its launch. The SUV is offered with a 72-horsepower 1.0-litre NA petrol engine or a 100-horsepower 1.0-litre turbo petrol engine. For both engine options, a 5-speed manual is available, as well as a CVT for the petrol automatic.

Nissan Magnite Is The Best Selling Car Of The Brand

The Oragadam plant of the Renault-Nissan alliance is the mother plant for Magnite, as well as its Renault twin, the Kiger, for India and overseas markets. Waiting times for the Magnite have been continuously increasing, and certain variations now have wait times of up to four months, depending on availability. According to Nissan India, the SUV has received more than one lakh reservations worldwide. The Magnite also has a four-star Global NCAP rating and a decent feature list to add to its safety credentials.

Nissan is working on a three-row version of the Mangnite SUV, as we previously reported. The vehicle will be produced alongside the normal Magnite in India, and it will be offered domestically as well as in regions such as Indonesia, where three-row SUVs and hatchbacks are very popular. For the Indonesian domestic market, the Kia Sonet, which is also built in India for markets such as Indonesia, has a similar seating layout.

Converted 6×6 Miltary Truck Is An Incredible Camper With Room To...