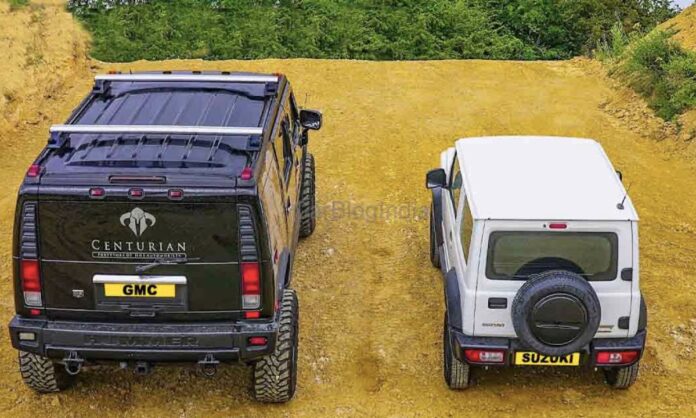 Here’s a fun off-roading challenge with a Suzuki Jimny and a Hummer H2. Jimny is a world-famous lightweight off-roading SUV that has long been successful in many international markets. The Hummer H2, on the other hand, was a popular pick for a slew of celebrities a few decades ago. It used to be propelled by a large engine of 44 horsepower. While this video is a few months old, it is still relevant for Indian viewers because the Jimny 5-door recently made its Indian debut. Let’s see what happens when these two go head-to-head in an off-road scenario.

Carwow developed the video, which can be found on YouTube. It is one of the world’s largest and most popular vehicle media outlets. The team has assembled a Jimny and a Hummer for this video’s off-roading challenge. In the first round, the two SUVs must race up a steep hill. Jimny is able to easily win this round due to his weight advantage. The second round tests the two SUVs’ maneuverability by having them go around a track completing a fast U-turn in the shortest amount of time.

The Hummer finished second in this round as well because to its enormous turning radius. Then there were activities designed to put both SUVs’ wheel articulation and ground clearance to the test. The Hummer performed marginally better than the Jimny in this category since the latter bottomed out in a few instances. The SUVs were then given another task to evaluate their hill descent control, in which the drivers pulled their foot off the brake pedal and the slowest to reach the bottom won. Jimny completely annihilated the H2 in this round.

Finally, the SUVs traveled up a steep incline covered with loose boulders laying on the track in the last round. Both SUVs fought for traction in this round. Both of them were able to reach the summit after 3-4 attempts, however, it required a run-up to gather speed initially. Overall, Jimny scored 10 points, but the H2 only scored 8. The video indisputably proves that the Jimny is the superior off-roader, yet it also costs less than half as much as the H2.

McLaren Enters The Metaverse World With MSO LAB, Will Include Rare...