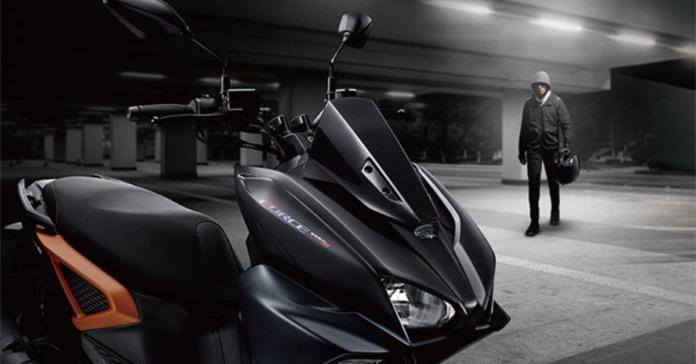 Yamaha recently debuted their Force 2.0 maxi-style scooter in Taiwan, with a price tag of TWD 99,000 (roughly 2.70 lakh Indian rupees). This scooter is based on the Aerox 155, which was just released in the Indian two-wheeler market for Rs 1.29 lakh (ex-showroom). As part of the overhaul, the brand has made considerable adjustments to the scooter. The twin headlights, as well as the tail lamp, have been sharpened, and the tail lamp is now a simpler, straight line rather than the previous angular one.

In terms of design, the Yamaha Force retains the halogen headlamp, but the side panels have been modified, and it now features a characteristic A-shaped element. It comes in four different colour options when it comes to colour options.
The most obvious stylistic difference between Force 2.0 and Aerox is the former’s flat floorboard vs the latter’s spine running through the middle of the floorboard. A flat single-piece seat and new alloy wheel designs are among the other upgrades. It rides on 13-inch alloy wheels rather than the 14-inch alloy wheels found on the Aerox.

The 155cc single-cylinder liquid-cooled engine that powers the Force 2.0 is the same one that powers the R15 V4, MT15, and Aerox. Yamaha’s patent on Variable Valve Actuation (VVA) technology is included in the engine. The scooter is based on a novel chassis, which allows the two-wheeler producer to tweak the overall proportions to match the requirements.

The seat of the Force 2.0 is flatter than on the Aerox, and the seat height has grown from 805mm to 815mm. The suspension has also been updated, with the Force 2.0 including two shocks with preload adjustment rather than the previous mono-shock. When it comes to the scooter’s launch in India, it does not appear to be imminent.