HomeCarPorsche 911 Dakar Prototype Goes For A Safari In The Ring With...
CarCar NewsExclusiveFun Reads 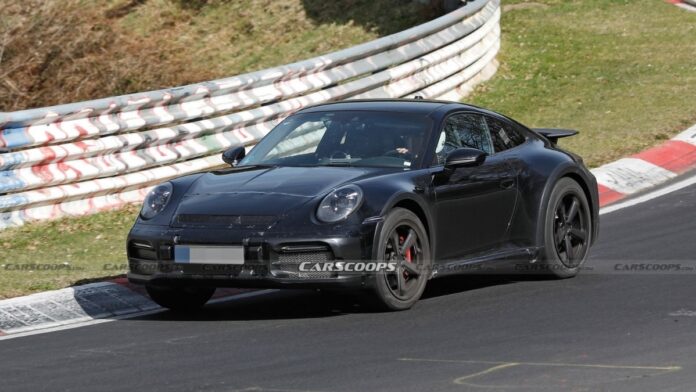 After nearly two years of testing, the Porsche 911 Dakar – formerly known as the Safari – appears to be coming closer to production. The newest prototype made another appearance at the Nürburgring, this time with a lovely set of Fuchs-style wheels that match its higher posture perfectly.

Since the first camouflaged prototypes debuted in 2020, a more adventurous model of the 992 with a greater ground clearance has been hotly touted. Initially, prototypes utilised the body of a 911 Turbo with a minor alterations, but Porsche began using a different form of camouflage in early 2022, likely to mask the design of the model-specific bodykit.

The black-finished five-spoke wheels, which are inspired by the iconic Fuchs design, are new this season. They’re shod in larger and beefier tyres on the most off-road capable 911, as well as vented brakes with red callipers.

Aside from the new shoes, the prototype has fender extensions to accommodate the wider tracks, altered intakes on the front bumper, a bonnet scoop, a fixed rear wing, and a skid-like diffuser with two big oval-shaped tailpipes at the back. We also expect it to have the facelifted 911’s upgrades, like as the redesigned digital cockpit and upgraded LED graphics on the lighting components.

This isn’t the first time the elevated 911 has been spotted at the ‘Ring for testing, with previous sightings in April and July 2021. After all, Porsche’s legendary German racetrack, the Nordschleife, plays a key part in the development of all production and racing models.