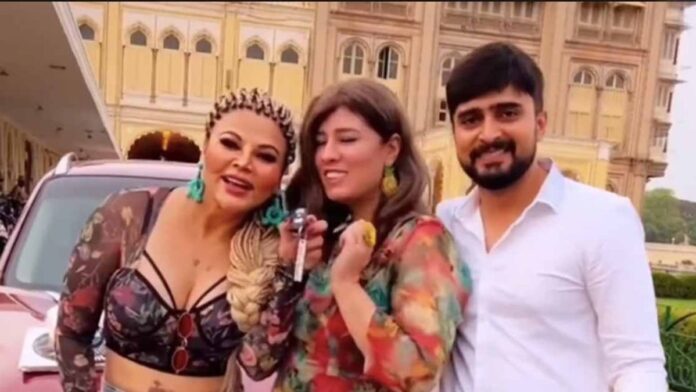 Rakhi Sawant is a celebrity who is frequently in the news for many reasons, the most recent of which is her new BMW X1. Rakhi, who rose to prominence after appearing on Bigg Boss, is known for being open with the public and for exposing practically every detail of her personal life on social media. In fact, she stated in a news interview that she cannot afford the same fancy cars as Salman Khan. Perhaps it was then that her dear friends Adil Khan Durrani and Shelly Lather decided to surprise her with a BMW. The former is a well-known hair and skin expert. The following are the specifics of this thoughtful act.

Rakhi informed her Instagram fans of the news. She thanked her pals for the expensive compact SUV she received as a gift. A cake was also made for her, which can be seen in the photos. It is emblazoned with the BMW insignia as well as the names of the friends who gave her the gift. Rakhi was then captured on camera driving her BMW X1 through the streets in a video clip posted to Instagram.

The BMW X1 is available with both petrol and diesel engines. The petrol engine produces 192 hp and 280 Nm, while the diesel engine delivers 190 hp and 400 Nm of peak power and torque, respectively. The former takes 7.7 seconds to accelerate from 0 to 100 km/h, whereas the latter takes 7.9 seconds. The BMW X1 has a starting price of Rs 41.50 lakh and can go up to Rs 44.50 lakh ex-showroom in India. Top Gear has named the luxury SUV the Luxury Mid-Size SUV of the Year 2021.