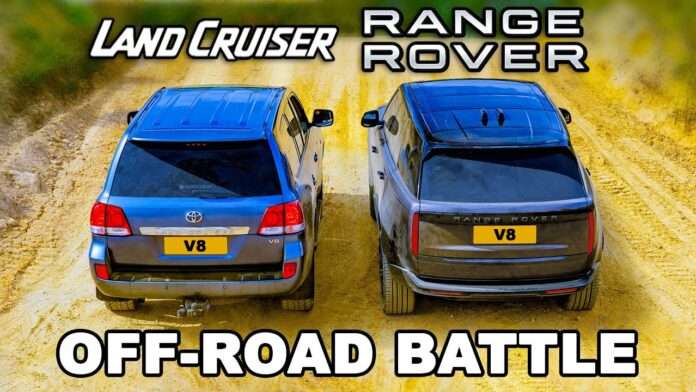 Even SUVs that love the dirt are now more convenient to play around with on off-road courses thanks to technological advancements. The brand-new Land Rover Range Rover is a prime example. The question of whether the upgrades necessarily make these SUVs better off-road arises in light of this.

Can the storied Toyota Land Cruiser defeat the technologically advanced RR in a race across off-road terrain? Carwow pits the two in a pre-made course with a series of challenges to test various off-roading metrics in an effort to provide an answer. It should be noted that the Land Cruiser shown here is from the previous generation, which debuted in 2007.

Let’s start by discussing numbers. The Land Cruiser J200 has a variety of available engines, but the one used in this battle is said to be a twin-turbo 4.4-liter V8 diesel that produces 479 pound-feet (650 Newton-meters) of torque and 272 horsepower (203 kilowatts). It has features like a center-locking differential and a low-range gearbox that are useful for off-road driving.

The 4.4-liter twin-turbo V8 gasoline engine powering the new Land Rover Range Rover can generate up to 530 horsepower (395 kW) and 553 lb-ft (750 Nm) of torque. It is lighter than the Land Cruiser and, naturally, has too many off-roading features to list here.

Carwow’s test, which began with an uphill drag race, pits these two hulking vehicles against six off-road obstacles. The vehicles’ descent control was also intended to be demonstrated in a downhill race, and their turning radius was tested on a manoeuvrability course. The SUVs’ suspension travel, chassis articulation, ground clearance, approach/departure angles, and performance on an incline were all tested on the “axle twister” course. The tests were completed with a long ascent.