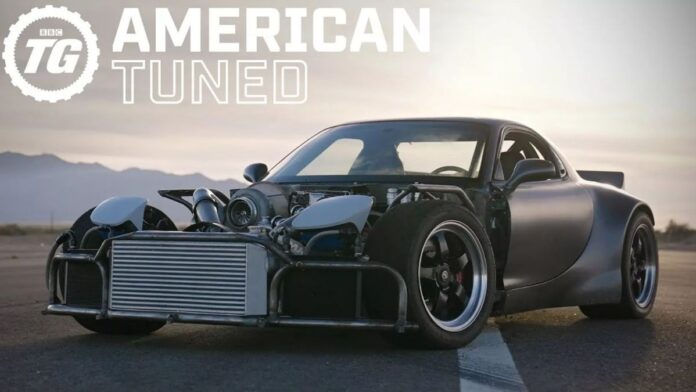 Rob Dahm has been developing and breaking his four-rotor RX-7 for quite some time, but this may be the most magnificent failure of them all. The massively modified Mazda proves to be too much for some 300M hardened steel in his debut film for a new Top Gear YouTube series dubbed American Tuned.

Of course, Dahm’s job entails breaking stuff. For well over a year, his channel has showed this same vehicle at various stages of completion, and throughout that time, he’s been gradually building it up into what may be one of the most robust tuner cars ever featured on YouTube.

He gives us a history on who he is and how this wild automobile came to be in its current state in this first episode of American Tuned. While this construction has taken a long time from start to completion, most of it is due to Dahm doing a lot of the work himself.

Dahm, an IT professional by trade, has had to learn a lot to bring this car to this stage, which is Chuckwalla Raceway for a tough shakedown test in this video. He correctly points out that having such a lengthy stretch of open road is ideal for fine-tuning the automobile.

This is basically a validation run with the added advantage of some great exhaust noise, as the car has previously been on a dyno. The RX-7 sounds like a racetrack as it revs up, and Dahm says the feeling is almost “too overpowering” because it’s the first time he’s had it at this degree of intensity.

Of course, not everything goes according to plan, and his day is cut short when his rear driver’s side axle snaps at the wheel hub. It’s actually a good thing that the spline itself shears off.

That’s one of the simpler things to fix out of all the things that could’ve gone wrong, and it’s not one of Dahm’s completely custom components. Hopefully, when the next component on our enthusiast vehicles breaks, we’ll all have that mindset.