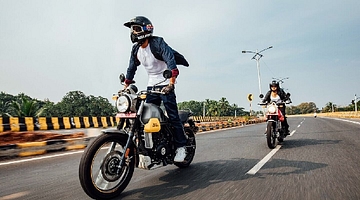 All You Need To Know About Royal Enfield Himalayan Scram 411

The Himalayan’s 411 cc single-cylinder, single overhead cam, air-cooled engine produces 24.3 horsepower at 6,500 rpm and 32 Nm of peak torque between 4,000 and 4,500 rpm. The Scram’s fueling has been tweaked to make the throttle response feel more crisp and responsive. The same map will be used in newer Himalayans as well.

The Scram has the same half-duplex frame as the Himalayan, but it has a 19-inch front wheel instead of the Himalayan’s 21-inch. The ground clearance has been reduced by 20 millimetres to 200 millimetres. The Scram’s front suspension travel is likewise 20 mm shorter, at 190 mm. The Scram 411 features a steeper rake due to improvements in the front suspension and a smaller front wheel.

The Scram 411 is a smaller and more approachable version of the Royal Enfield Himalayan. The Scram 411 lacks the Himalayan’s windscreen and the headlamp is set somewhat lower, giving the Scram a more appealing appearance. The tank-mounted baggage mounts have also been removed, and tank shrouds have been installed in their place. The side panels have also changed, and the seat has been redesigned as a single-piece item with a 5 mm lower seat height. The single-pod offset instrument console is likewise different, and the rear grip rail is shorter.