Nationwide, Royal Enfield motorcycles make the ideal canvases for modifications. One such example is the Thunderbird Beast by Roadside Customs, which ditched the stock motorcycle’s typical cruiser stance in favour of a stunning Softail appearance with an ape hanger handlebar.

As the smaller rear wheel satisfies the desire of riders to sit low and take in the view via the enormous handlebar, it has a chopper-like sensation. Beast sports a shaved rear fender and keeps the dual shock absorber configuration from Royal Enfield. Between the engine and the back fender, every component was taken out.

As a result, the rear half is left unoccupied and magnificent from all sides. While using a bespoke exhaust to improve both aesthetic and audible presence, the engine was kept unaltered. Beast has a single, skinny saddle and a gasoline tank that strongly resembles the Harley Davidson Iron 883.

The ape hanger handlebar may not feel as comfortable to ride as it appears. The foot pegs may have been moved forward for a more relaxing riding posture, but they are in the middle of the bike. The front just has a headlamp with plenty of chrome and a bright holder.

Since Royal Enfield motorcycles have the fewest complicated parts, modifiers are happy to use one as their source bike in most circumstances. On the well-liked Classic, Bullet, and Thunderbird series of bikes, they currently offer two engines. The single-cylinder, 346cc engine has a 19.8 BHP and 28 Nm of torque rating.

It is fueled by a carburetor-equipped unit, as opposed to the fuel injection used in the larger 499cc engine. That one produces 41.4 Nm of torque and 27.2 BHP. While it appears that Beast can be built on either of the two, the engine used in this case is unknown. In India, the Royal Enfield line-up begins at INR 1.13 lakh. 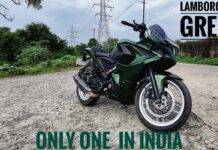 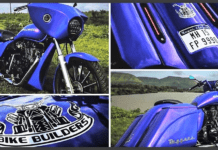