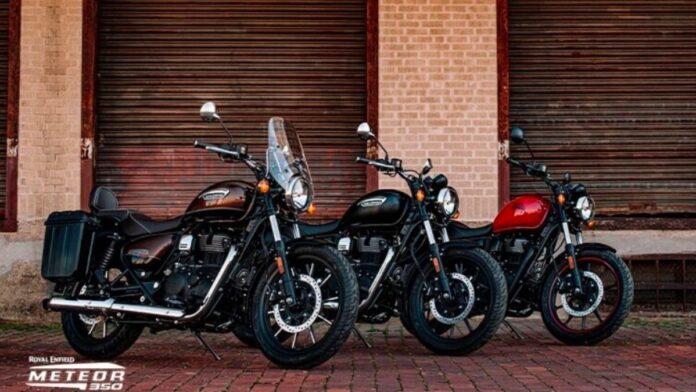 The Royal Enfield Meteor 350 has been praised around the world for making the cruiser platform more accessible to a wider range of riders. Riders had few options before the Meteor 350, which were Honda’s small-displacement Rebels, Harley’s 883 Sportster, and the divisive Kawasaki Vulcan 650. When compared to the naked and adventure bike categories, the Meteor 350 was a new face in a market that was experiencing limited growth.

The Meteor 350 is still a popular choice among first-timers and seasoned riders searching for a tractable, easy-to-use motorcycle for around-town duty or leisurely journeys a little over a year after its debut. Royal Enfield has released new colors for this bike in India in order to update its look. However, the update comes with a minor price increase of Rs 4,225, which translates to roughly $56 USD. Nonetheless, the new colours give the bike’s traditional look a new lease on life. Let’s look at it more closely.

Which Are The 3 New Colours

Supernova Red, Fireball Blue, and Fireball Matte Green are the three new hues that make up the updated Meteor 350 lineup. It’s worth noting that existing colours will continue to be offered, so these three colours are in addition to what’s already available. To begin, the Supernova Red colour scheme is a two-tone design with a dazzling glossy red finish above a deep black finish. This gives the cruiser a very sophisticated appearance, nearly evoking the vintage-inspired hues seen on classic British motorcycles.

The Royal Enfield Fireball Blue version, on the other hand, is a first. The paint is a deep monotone blue with a yellow Royal Enfield emblem on the side of the tank and on the lips of the rims, which showcases the Meteor 350’s intrinsically sleek lines. Last but not least, the Matte Green hue provides the Meteor 350 a military-style appearance, akin to the Royal Enfield Classic and Bullet 350 from the previous generation. It’s a matte dark green with matching rim stickers and a black Royal Enfield logo.

Other Changes On Meteor 350

Aside from the new colour options, the bike’s components and functions have remained unchanged. As a result, it continues to be propelled by a 349cc air-cooled single-cylinder engine that produces a moderate 21 horsepower. The back wheel is driven by a traditional five-speed gearbox. There’s no indication on when these colour selections will be available in markets outside of India, but it’s expected to happen shortly.