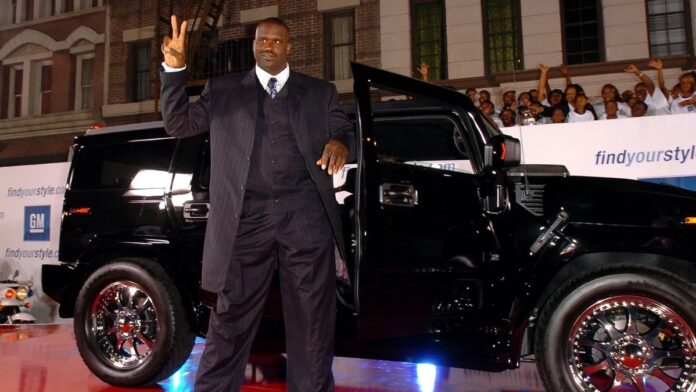 Shaquille O’Neal, the former NBA MVP, is a big fan of custom vehicles. They should be large enough to suit his 7ft 1in the frame. So, how is he going to squeeze into his Smart car? The roof has been sawn off. He even had his Ferrari and Lamborghini stretched, but it’s unclear how he operates the pedals with size 23 shoes.

The baller was born in New Jersey on March 6, 1972, and spent his childhood on military stations in Germany and Texas with his army sergeant stepfather. Before joining the NBA, he played for Louisiana State University and was named Rookie Of The Year in 1993. Shaq started with a basic Ford Bronco II and worked his way up to Italian exotics and one-of-a-kind luxury vehicles. He’ll have logged some big cross-country miles after playing for the Orlando Magic, Los Angeles Lakers, Miami Heat, Phoenix Suns, Cleveland Cavaliers, and Boston Celtics. After 19 seasons, he retired from racing in 2011 and has since focused on some quite unique three- and four-wheelers.

The Big Shaq car lineup starts with the classic Eldorado Convertible. This isn’t just a classic Cadillac, but the one driven in the Scarface by Tony Montana. Shaq is a big fan of this 1983 movie and has bought one for himself to drive it around.

Well, Ferrari isn’t a thing that can fit in a man like Shaq, that is the reason it has its roof off. Shaquille O’Neal Car Collection’s next car is the Ferrari 355 F1 Spider with a custom convertible roof.

To give the owner additional legroom, the stock gasoline tank was changed with a unique front-mounted tank, which pushed the seats back nine inches.

Here’s something more just than normal in the collection. The Big man owns a Chevy Express G1500 which is basically a van fully customized. A Chevy Express van wouldn’t ordinarily merit a spot on one of our celebrity vehicle lists, but this one does thanks to the Louis Vuitton quilted leather interior.

It rides on 20-inch rims with lowered air suspension. A 100-inch HD film projector and an Xbox are also included. Well, quite a lot of fun in there.

Shaq loves buying crazing things like this one, an Escalade with scissor doors. At the front, this car has a superman logo and is painted in burgundy color. 26-inch wheels and enlarged scissor-style doors have been added to the Escalade. The eight Audiobahn 12-inch subwoofers, as well as the 5.3-liter V8, will let you know it’s coming.

The Big Shaq, like other American athletes, has numerous Bentleys, but he purchased all three at the same time. He owns the mentioned three cars from Bently and once said “I was playing for the Los Angeles Lakers, and Beverly Hills has a Rolls-Royce showroom.” I used to cycle past it all the time, then one day I simply walked in. Mike Tyson was in the store, purchasing two Bentleys. ‘Sir, how much does this one cost?’ I asked the salesperson, dressed in shorts, a tank top, and flip-flops. ‘Can you afford it, sonny boy?’ he said. I was so outraged that I went out and bought three Bentleys on the spot.”

This is a very remarkable transformation. Shaq purchased a 2006 Mercedes-Benz S-Class in pearl white with brown leather. Very far, everything has been so routine. Further, Shaq customized this car into a long convertible with help of Lorinser.

Lorinser spruced up the car with a strong body package and 22-inch rims, as well as suicide rear doors for increased oomph. During his championship-winning season with the Miami Heat, the “Hobo Master” ordered this, and this S550 is white-hot.

Probably the second supercar on the list which is also a convertible. Because Italian supercars are rarely designed with 7ft 1in clientele in mind, Shaq sought the advice of a professional once more. That is, a jet expert.

Boeing is usually supplied by Gaffoglio Family Metalcrafters. They lengthened the Gallardo’s wheelbase by 12 inches and widened the doors, roof, and side windows.

Dodge Challenger Convertible?? yea that’s fine. The “Shaqcat,” a 707bhp Hellcat-powered beast with red LED headlights and unique underglow lighting, as well as a convertible roof, is known as the “Shaqcat.” To make it seem like an old Plymouth Barracuda, Shaq added Hemi decals to the body.

It’s Big Shaq right, you never expect normal things to be there. This car is something unique making the car collection special. An elongated three-wheel car. The “Sling-Shaq” is a three-wheel open-air roadster that O’Neal has highly customized with four seats and an 18-speaker sound system, just like practically everything else in his garage.

It has a 173bhp 2.4-liter four-cylinder GM Ecotec engine and weighs less than 800kg, so it can reach 60mph in less than five seconds.

Nope, three-wheel cars don’t end there, well there’s one more on the list. Shaq also owns a Vanderhall Venice Roadster built in Utah and an alternative to the Morgan cars.

The sports star has the chassis expanded once again, but despite the increased curb weight and cargo, the 1.4-liter turbocharged engine is still capable of providing a thrilling ride.

Big Shaq’s car collection is getting crazy car by car. The Vaydor is a 2003-2007 Infiniti G35 Coupé with an aftermarket shell that transforms it into something completely different.

The Carolina Vaydor body kit was initially released in 2013, and The Joker drove a Vaydor in the 2016 DC film Suicide Squad. Despite the pricey suit and some weight savings, it’s still powered by the Nissan-built 3.5-liter V6 found in the G35, so it’s not quite a supercar. Even yet, it makes The Big Daddy stand out even more – as if he didn’t already.

Coming back to some standard cars Big Shaq also owns this luxury SUV from Roll-Royce. The Cullinan is itself to be called a celebrity car, and well has plenty of room inside for the big man. Hopefully, this car is still kept as standard not confirmed for how long because he’s Big Shaq you never know!

Ended up the Shaquille O’Neal Car Collection with this hydrogen-powered truck from Nikola. Shaq, dubbed “The Diesel” among other nicknames, is ready to go electric.

He’s ordered the Nikola Badger, a hydrogen fuel cell electric hybrid pick-up truck that will be manufactured in Arizona later this year and will go from zero to sixty in 2.9 seconds owing to its jaw-dropping 906bhp power. Honey Badger, with its 980lb-ft of torque, could be a better moniker. We’re excited to see how he personalizes it.