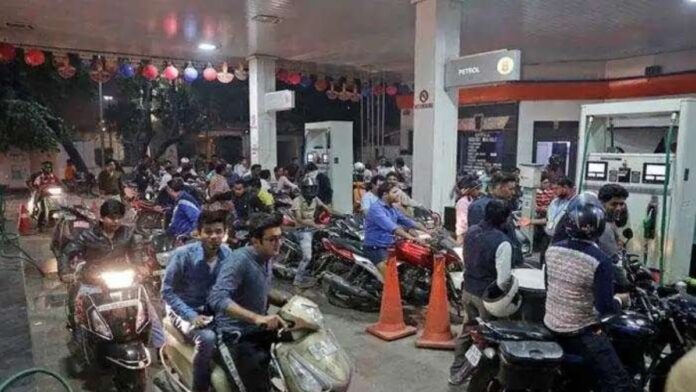 On the occasion of MLA Pratap Sarnaik’s birthday, Shiv Sena workers provided petrol at a rate of Rs. 1 per litre. This happened today near Tatvagyan University on Ghodbundar Road in Thane at Kailash Petrol Pump. This, however, was only available to the first 1,000 purchasers.

Former Thane Municipal Corporation (TMC) corporator Aasha Dongre, along with Abdul Salaam and social worker Sandeep Dongre, took this action. Thousands of cars flocked to the gas station to fill up their tanks. This was also a symbolic protest by the Shiv Sena over the country’s rising petrol prices.

A long line formed in front of the Kailash Petrol Pump at 10 a.m. According to Sandeep Dongre, the petrol pump was paid roughly Rs. 1.2 lakhs. Aasha Dongre, Sandeep’s wife and a TMC Corporator was the one who came up with the idea first. Petrol and fuel costs are steadily rising, and the federal government has taken no steps to combat this. “We can’t do anything about the price spike,” Sandeep added, “but we can bring a smile to the face of the average guy for at least one day, and that’s why we began this effort of donating petrol at Rs 1 to the first 1000 motorists. Seeing the positive response, we will endeavour to execute such an effort every now and then until the price of gas falls below Rs 100.”

“Today, no one is willing to see the difficulty that the ordinary man is facing, but most politicians are involved in a topic that is not at all essential to the common man.” If a Thane resident drives himself to work in Mumbai, he will have to burn a hole in his pocket of at least Rs 400 per day, which is a pricey business. So, if gas becomes accessible for Rs 1 per litre one day, it will bring joy to their faces.” He went on to say

In Rajasthan, the price of petrol has risen to Rs. 122 per litre.

People came to Punjab to fill their fuel tanks as a result of this. Fuel prices were substantially lower in Punjab. In Punjab, petrol costs Rs. 105.26 per litre and diesel costs Rs. 93.91 per litre.

As individuals travelled to different states, Sri Ganganagar’s petrol stations began to lose money. In fact, due to the high cost of gasoline, 80 percent of gas stations were on the edge of closing.

Read More: Maruti’s 1.5L Petrol Engine Has Been Updated For The New Brezza,…