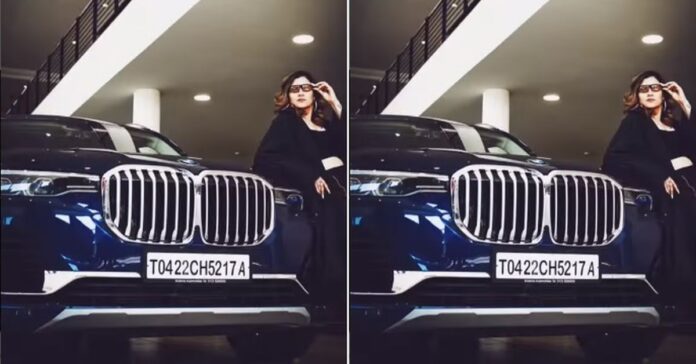 We’ve covered a number of articles regarding celebrities’ garages and new modifications to them. SUVs are also very popular among celebrities, as we have seen in the past. Aastha Gill, an Indian singer, is the newest member of the celebrity SUV club. The well-known backing vocalist and songwriter just purchased a brand new BMW X7 luxury SUV. On social media, the singer posted a video of herself receiving her new car.

Aastha Gill is a well-known vocalist in the industry, and several of his previous songs have already gone viral. Aastha Gill is seen taking delivery of her brand new SUV in this video she posted to her personal Instagram page. Before driving it out, the artist is seen posing with the videos. BMW’s new flagship SUV, the X7, is the company’s new flagship SUV. In its class, it competes with luxury SUVs such as the Mercedes-Benz GLS. In India, the BMW X7 was initially introduced in 2019. It was formerly offered as a CBU but is now accessible as a CKD.

The X7’s exterior design is undeniably BMW. It has a large kidney grille up front, with two streamlined headlight units on either side. On the side profile, there are huge alloy wheels that complement the car’s overall appearance. The BMW X7’s side profile truly exposes the SUV’s true length. With wraparound split LED tail lamps and BMX X7 branding on the tailgate, the back gets a hefty flair. The BMW X7 SUV is the SUV version of BMW’s flagship car, the 7-Series.

The BMW X7 is a luxury SUV, and like any other flagship model, it comes with a long list of standard features. Laser headlights, ambient lighting, a panoramic three-piece sunroof, a digital instrument cluster, 5 zone temperature control, automatic parking, and a reclining function for all three rows are among the features available on the BMW X7. The X7’s dashboard design is actually quite similar to that of previous BMW models. A company-installed touchscreen infotainment system is in the middle of the tiered dashboard with the latest iDrive technology. It also has a fully digital instrument panel, multi-function steering wheels, and a Crystal-effect gear lever, as well as a voice assistant option, which is becoming increasingly prevalent in modern cars.

In the video, it’s unclear which of the two options the singer chose. The BMW X7 SUV is available with both petrol and diesel engines. The SUV comes in three different versions: x30d DPE Signature, M50d, and xDrive 40i. The 3.0-liter twin power turbocharged straight 6 diesel engine in the x30d DOE Signature model produces 261 Bhp and 620 Nm of peak torque. The M50d has the same 3.0 litre turbocharged diesel engine as the M50, but it produces 394 horsepower and 760 Nm of peak torque.

The 3.0 litre turbo petrol engine in the xDrive 40i model produces 335 Bhp and 450 Nm of peak torque. All of these engines come with an eight-speed automatic transmission. The BMW X7 SUV is priced from Rs 1.15 crore ex-showroom to Rs 1.73 crore ex-showroom.