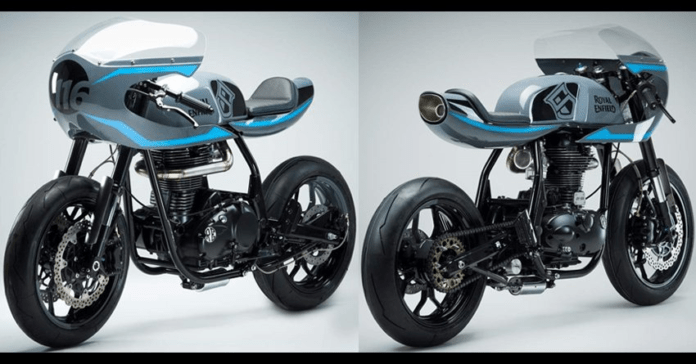 There is no doubt that the Royal Enfield Surf Racer is the greatest Continental GT conversion ever made. The motorcycle, which is on display at Wheels and Waves in France, looks lively thanks to its extensive renovation. Instead of the earlier unit, it now has a semi-fairing and employs an under-seat exhaust. It was built by UK-based Sinroja Motorcycles in a way that eliminated every pointless component from its body. The only things visible are the exposed frame, the 535cc engine, and the upgraded brakes on both ends. Instead of a headlamp, the front fascia now holds a totally curved fairing.

The motorcycle’s cool Blue colour looks amazing, and the addition of 17-inch performance wheels, USD front forks, and a rear monoshock makes it far more useful on the racetrack. The seat has a brown leather finish and has been cut so that it can be utilised with a backrest. The motorbike is now significantly lighter than the factory model, and installing better exhaust, tyres, and fairing would result in a noticeable increase in top speed. The overall ride quality is improved by the larger brakes and stronger suspension.

The 535cc, air-cooled, fuel-injected engine of the no longer produced Royal Enfield Continental GT generates 29.1 BHP at 5100 rpm and 44 Nm at 4000 rpm. It comes equipped with a 5-speed transmission and Pirelli Sport Demon tyres as standard. It has a top speed of 145 kmph and weighs 184 kg in stock form. GT Black, GT Green, and GT Red are available as stock colours. The 650cc 2-cylinder Continental GT from Royal Enfield will soon be available in India, with a projected ex-showroom price of about INR 2.75 lakh.