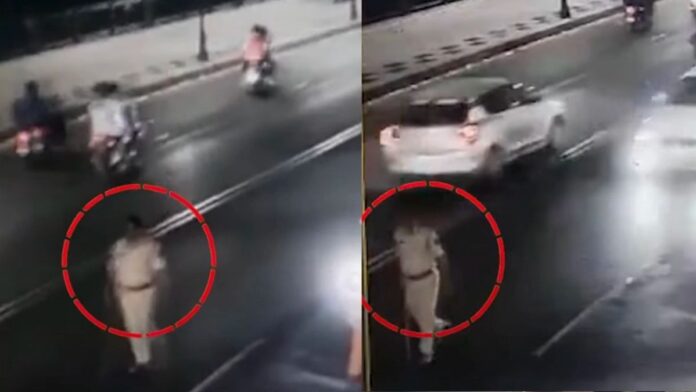 In Hyderabad, a speeding BMW vehicle hit a police officer. Inspector Jahangir Yadav stepped out of his cruiser in the middle of the night and began strolling to disperse the mob.

The incident was captured on camera. It depicts an unsuspecting inspector walking down the street. The BMW enters the frame at full speed and does not slow down until the very last second. The video shows the automobile striking the inspector from behind, pushing police officers to the top of the BMW’s bonnet.

The inspector is no longer in jeopardy. In addition, the police officer had no major injuries and was able to stand up after being struck. Mir Osman Ali Khan, the vehicle’s driver, has been identified. He claims he was not aware of the cop strolling down the street because he is a used vehicle dealer. It’s possible, given that the footage depicts a dark stretch of road.

A police report has been filed against the motorist. The driver has been charged with violating section 337 of the Indian Penal Code. The cops immediately confiscated the vehicle.

The officers began walking in the middle of the road without checking behind them, according to the CCTV footage. Even the cop, we believe, was at fault in this circumstance.

The CCTV footage demonstrates that there were no police checkpoints and that the vehicles were not stopped for any type of document verification. However, there have been numerous situations in which automobile drivers purposefully hit cops and carry them on their bonnets in order to avoid receiving a challan.

A police officer signaled down a driver named Yuvraj Hanuvate because he was not wearing a mask correctly. The driver of the car, however, did not stop and drove right past the police officer. When the cop noticed the driver was attempting to flee, he became more vigilant. The cops ran and stood in front of the automobile as soon as the driver slowed down owing to traffic, but Hanuvate, the driver, continued driving. He abruptly pushed the car’s pedal, causing the traffic in charge to crash into the bonnet. These kinds of things happen all the time.

Stop car when cops ask to do so

Almost all police departments now have wireless equipment that may be used to ensure that such vehicles can be stopped by officers stationed ahead of them. Running away from the cops implies that you have committed a crime. Even the government is working to make the procedure of issuing fines and challans more efficient. Most cops merely take a picture of the infraction and submit the challan online. Running away from police officers when ordered to halt for any reason is a much more serious offence.

If you believe you have been wrongfully fined, you have the option of contesting the fine in court or protesting to senior police authorities. Yes, it’s a lengthy procedure, but it’s necessary.