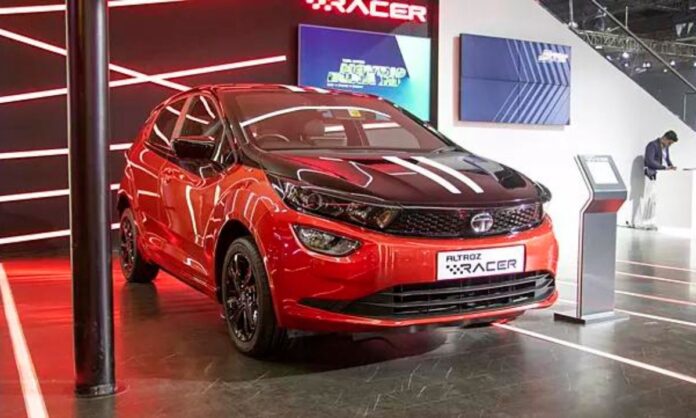 Tata Motors exhibited the Altroz Racer at the Auto Expo 2023, a special edition designed to compete with the Hyundai i20 N series. The Altroz Racer is a performance-oriented hatchback with a powerful engine and a slew of amenities given by the Indian automaker in its sector. But what exactly is it all about? Let’s go at the Altroz Racer picture collection to find out.

The Altroz Racer’s front fascia is comparable to that of the regular trim, with the same grille, headlights, and fog lamp housing. The blacked-out hood with contrasting dual white stripes gives it a sporty flair.

The sporty hatchback receives a gloss black treatment on the sides, including the ORVMs, pillars, roofline, and even the 16-inch diamond-cut alloy wheels. The front fender also has a ‘Racer’ insignia.

The rear has a more noticeable roof-mounter spoiler, shark fin antenna, and blacked-out parts with the same LED tail light configuration as the front.

Inside, the dashboard layout is similar yet refreshing. It has a new 10.25-inch touchscreen entertainment system, a seven-inch digital instrument cluster, a flat-bottom steering wheel, and red highlights on the AC vents and the gear lever. To complement the overall colour scheme, the seats are upholstered in black leather with red stitching and white accents.

This time around, it also has a voice-activated electric sunroof, which was lacking in the regular Altroz models.

The Altroz Racer is powered by the same 1.2-litre turbo-petrol engine used in the Tata Nexon. This engine generates 118bhp and 170Nm of torque and is paired with a six-speed manual gearbox.