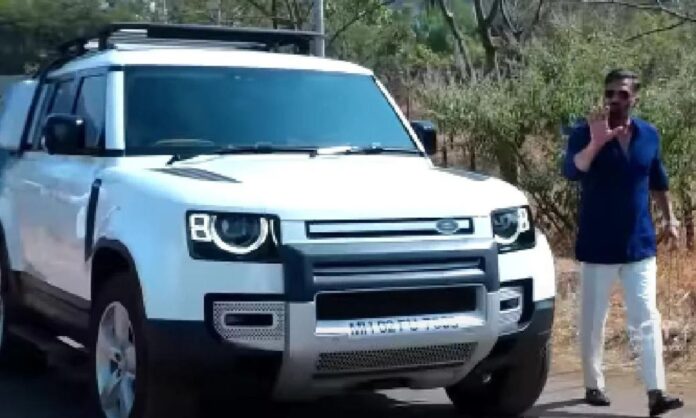 Suniel Shetty, the legendary actor, is seen in this recent video with his luxury Land Rover Defender SUV. Suniel, for example, requires no introduction because he has long been one of the most popular performers. Her daughter Athiya is said to be getting married today to star cricketer KL Rahul. Sunil Shetty appears to have been preoccupied with preparations and ceremonies, as evidenced by his appearance in front of the photographers. He’s seen thanking them and addressing the crowd at what appears to be his Khandala property. Here are the specifics.

Suniel Shetty in front of his Land Rover Defender

Cars For You has released the video to YouTube. This channel continues to produce information about celebrities and their flashy and pricey automobiles. Sunil Shetty alias Anna was sighted this time. He is seen welcoming the paparazzi as he exits his white Land Rover Defender luxury SUV. Many individuals emerge from the SUV who appear to be his security men. After a brief conversation with the cameraman, he climbs back into his expensive SUV and drives away.

The Land Rover Defender is available in three models: 90, 110, and 130. The Defender X is powered by a 3.0-litre 6-cylinder mild hybrid petrol engine with 400 PS and 550 Nm of peak power and torque. The 8-speed automatic transmission sends power to all four wheels. It can reach a peak speed of 191 km/h. Despite weighing a massive 3,380 kg, it can accelerate from 0 to 100 km/h in just 6.6 seconds (Gross Vehicle Weight).

The SUV features air suspension since it is also intended for off-roading trips. The greatest ground clearance is 290 mm. That should be enough to get you over most roadblocks. The SUV’s length is just shy of 5.1 metres, and its wheelbase is well over 3 metres. The SUV’s costs start at Rs 80 lakh and go all the way up to Rs 2.19 crore, ex-showroom. How do you feel about the Suniel Shetty Land Rover Defender?