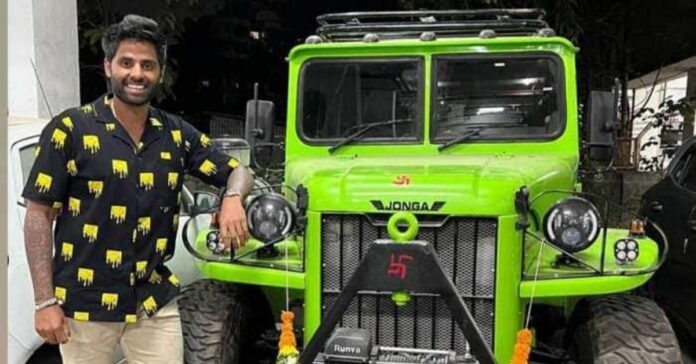 Suryakumar Yadav, the Indian cricketer, is now one of the few people in the country to possess the classic Nissan 1 Ton, often known as the Nissan Jonga. The heavy-duty off-road vehicle was previously used by the Indian Army, and its name, Jonga, is an abbreviation for Jabalpur Ordnance and Guncarriage Assembly, and it was built by the Vehicle Factory Jabalpur (VFJ). Suryakumar recently posted photographs of his substantially modified bright green Nissan Jonga on social media with the caption, ” Say welcome to my new toy ‘HULK’.” Mahendra Singh Dhoni, the former captain of the Indian cricket team, is also the proud owner of a Nissan Jonga.

About The Nissan Jonga

The fact that the Jonga was originally constructed exclusively for the Indian Army under an exclusive licence granted by Nissan in 1965 is what makes it so unique. From 1969 until 1999, the vehicle was in service, and it was mostly replaced by the Mahindra MM540 jeep. VFJ did, however, produce a civilian version of the Jonga, which was released in 1996. Until the vehicle was phased out in 1999, just 100 units were sold to people.

The Jonga is powered by a 3.9-litre six-cylinder diesel engine that produces 110 horsepower and 264 Nm of torque. It came equipped with a three-speed manual transmission and four-wheel drive. Yadav’s Jonga has been repaired to near-perfect condition and is equipped with a heavy-duty bumper, a strong winch, LED lights, and other amenities.

Other exotic vehicles in Suryakumar Yadav’s automobile collection include the Range Rover Velar, a MINI Cooper S, and an Audi RS5. Yadav is also the proud owner of a Skoda Superb vehicle.