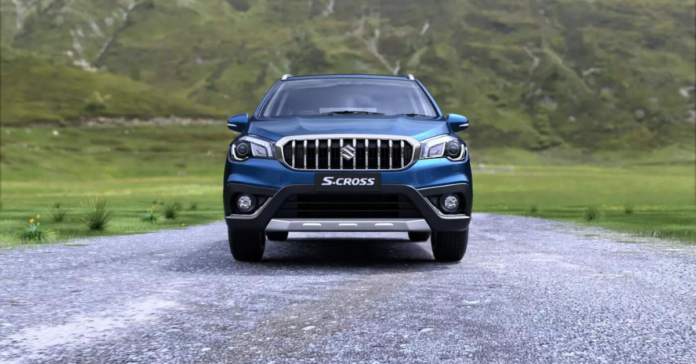 On November 26, 2021, Suzuki officially unveiled the heavily updated 2022 model of the S-Cross. According to available information, sales of the new Suzuki S-Cross have already begun in European countries, and the new model is on display at dealerships throughout Europe.

The new S-Cross model is being produced for international markets by Magyar Suzuki Corporation, the brand’s Hungary-based subsidiary. In terms of the India launch, it is expected that Maruti will introduce the new S-Cross in our country later this year. Here are the MY2022 Suzuki S-live Cross’s exterior and interior photos:

In terms of design, the new S-Cross features a wider piano black front grille flanked by three-point LED headlights, emphasising its urban appearance. The chunkier wheel arches, as well as the aggressive black plastic body wrapping, add to the crossover vibe. The bonnet has been updated as well, and it now has a more robust stance. Large air intakes and well-placed fog lamps are present, and the skid plate adds to the crossover’s toughness.

The rear end has been completely redesigned, with L-shaped tail light clusters and a glossy black plastic strip running through the centre. Some interior elements, such as air-conditioning vents and switch knobs, have been retained. But, for the most part, the cabin has also been modernised. Then there’s a new freestanding 9.0-inch touchscreen in the centre console, which supports Android Auto and Apple CarPlay, but everything else looks the same. On its predecessor, we saw the temperature controls, driving mode selection, and gear lever.

The 2022 Suzuki S-Cross is powered by a 1.4-liter DITC (Direct Injection Turbo Charged) petrol engine paired with Suzuki’s 48-volt SHVS mild-hybrid technology. At 5,500 rpm, the engine produces 129 PS and 235 Nm of torque between 2,000 and 3,000 rpm. The onboard electric motor produces 13.59 PS of power and 50 Nm of torque. The crossover comes standard with Suzuki’s ALLGRIP SELECT four-wheel-drive system. It is controlled by a dial on the instrument panel.