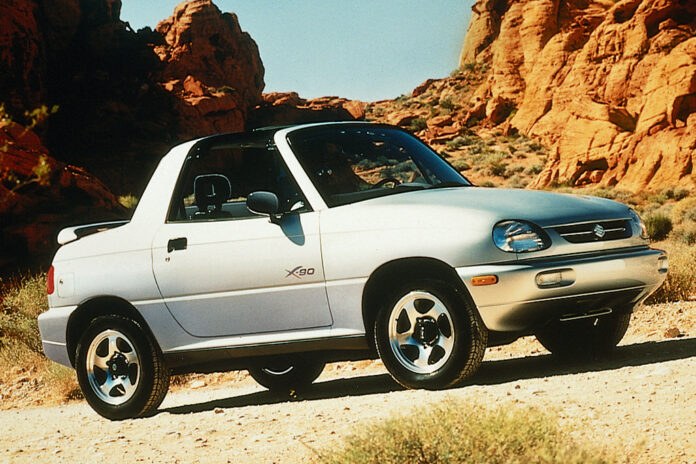 Suzuki is known for manufacturing various legendary cars like the Cultus, Swift and Cappuccino. In India, they do a collaborative business with Maruti Udyog Limited, producing cars under the brand name Maruti Suzuki. Over the course of time, Suzuki has been making some good bikes as well as cars. But in the 90s, they thought that making a practical sports car is a good idea. The result was the X-90, replacing the Suzuki Samurai. It received negative reviews from critics. Let’s see why the Suzuki X-90 is the weirdest car ever made by the company:-

Think about mixing a nimble sports car with a 4×4. Then look at the X-90. You will realize that’s what it is. Suzuki engineers thought of merging the Capuccino and Vitara as the former was not safe for all markets and as the 4×4 craze was at its peak. The result was a rather ugly looking X-90. It had the 4×4 from Vitara and the looks of Cappuccino. But not the complete cappuccino, a cramped one.

The Suzuki X-90 gets power from a 1.6 litre SOHC 16 valve engine that produces a mere 95 HP. It is mated with a five-speed gearbox. Nought to 60 mph takes 10.8 seconds with maximum speed being 94 mph.

Look wise, it is not special or something. But it’s the Four Wheel Drive that’s the main highlight here. It gets features like four-wheel ABS, power windows, power steering, dual airbags, antilock brakes and optional air conditioning. The Suzuki X-90 also gets a boot that is only sufficient to store groceries and other day-to-day stuff. It also kinda mimics the Pontiac Firebird with the removable T-top roof.

The production of X90 ended in one year. This should be enough to tell how bad it was. Only 1300 were sold in the Japanese market and 7205 were imported to the United States. The main disadvantage of the X90 was its sibling, i.e. the Vitara itself. It was bigger and more value for money. Suzuki provided a 25% discount on the ex-showroom price and still, no one bought the X-90. Oh, and there was a limited Philippe Cousteau edition of the car as well. A limited-edition of a car that already sold in limited numbers…

The Suzuki X-90 surely looks promising on paper. But it has no new qualities apart from the Vitara sourced 4×4. It was an answer to a question nobody asked. Its sibling Vitara was better value for money and got much love from critics. On the other hand, critics hated the X-90 as a complete package. It was a major misstep by Suzuki. Keeping the past aside, people are turning this little car into a capable off-roader with modifications and trust us; they look pretty cool for a car of this size !!