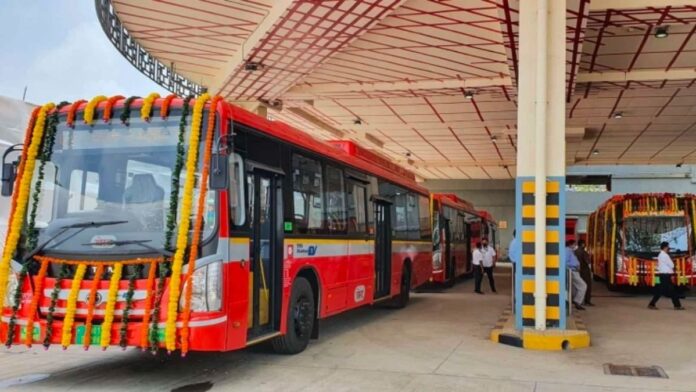 In India’s largest electric bus tender, Tata Motors, the country’s homegrown automotive maker, was the lowest bidder for the 5,450 electric bus tender for Rs. 5,000 crore. The tender was offered under the Centre’s FAME II initiative by Convergence Energy Services Ltd. (CESL), and the contract will be valid for 12 years, according to CESL. The Ministry of Heavy Industries (MHI) has announced the launch of a tender for the world’s largest bus aggregation, which will include 5,450 buses operating in five major cities: Kolkata, Delhi, Bangalore, Hyderabad, and Surat.

In addition to Tata Motors, the electric bus contract was also bid on by Switch Mobility (Ashok Leyland’s EV division), VECV (a joint venture between Eicher Motors and Volvo Group), and Evey Trans of the Olectra Group. The method was divided into five groups, with a difference of around Rs. 10 between the lowest and second-lowest bidders in each category.

“We are happy to learn that we are the lowest bidder for the prestigious tender from Convergence Energy Services Ltd. (CESL),” stated a Tata Motors spokeswoman. “Tata Motors is committed to provide green, safe, and sustainable transportation solutions across the country.” We’re waiting for CESL to provide us an official communication.”

Over the next 12 years, Tata Motors’ electric buses will travel 4.71 billion kilometres. According to estimates, this will save 1.88 billion litres of fossil fuel and result in 3.31 million tonnes of CO2 emissions at the tailpipe, reducing climate change. Furthermore, this procurement will provide 25,000 job opportunities, with around 10% of those reserved for women.

In other Tata news, the business debuted its new Avinya EV prototype yesterday. Tata’s new Gen 3 platform for pure electric vehicles, which will be delivered soon, is the foundation for the all-new EV prototype. The production-spec automobiles, which will be built on the Gen 3 platform, will be ready in 2025. These automobiles are expected to have a range of more than 500 kilometres.

The Avinya has a unique and appealing appearance. It has a copper and black dual-tone finish. There is no front grille because it is an electric vehicle. The A-pillar is formed by the steepening of the front bonnet. On the outside of the vehicle, there are no typical rearview mirrors. Instead, cameras have been installed.

The Avinya EV is 4.3 metres long, however the cabin space is significantly larger despite the same footprint. The Gen 3 platform will be nothing more than a skateboard platform, with the batteries installed on the floorboard and dust and water resistant. Tata Motors has claimed that numerous models would be based on this platform, with a variety of body styles and driving ranges that will be altered according to demand.

New Tata Nexon EV With Long-Range Launching On 11th May