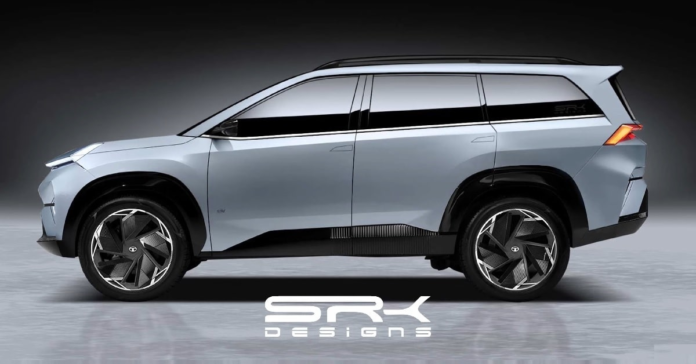 In the country, Tata Motors recently showcased the all-new Curvv EV mid-size SUV concept. The automaker has announced that its production-ready model will debut as a pure electric vehicle first, with petrol and diesel models following. It will compete against the Hyundai Creta, Kia Seltos, Skoda Kushaq, and Volkswagen Taigun in this segment. The mid-size SUV EV coupe, however, will not be available until 2024.

The production-ready version of the Tata Curvv three-row SUV is shown in this computer rendering. Unlike the idea, which has a curved roofline and a notchback-like boot, the depicted model has a sloping roof that looks like it belongs on an SUV, complete with sporty black roof rails. It is distinguished from the idea by its highly sloped front windshield, more upright hood, and somewhat different alloy wheels. Triangular air vents and a full-width LED light bar are included.

Tata’s Curvv SUV concept will be built on the company’s Generation 2 EV architecture, which can accommodate a variety of body shapes and powertrains. It’s basically a tweaked version of Nexon’s platform. It previews Tata’s new ‘Digital’ Design language, which will be used in future SUVs as well.

The Curvv SUV idea features a sculpted front bumper with a black section stretching the length of the vehicle and triangular headlamp housings. Squared-off wheel arches, blacked-out side claddings, digital ORVMs, and a tinted sunroof are some of the other design elements.

The Tata Curvv electric SUV prototype has a futuristic interior. The model has a three-layered dashboard with an LED light strip running the length of the interior, two free-standing digital screens (one for the infotainment system and one for the instrument cluster), and a new-generation steering wheel with a backlit logo, all designed with a minimalistic approach. On the centre console, you’ll discover a rotary knob for changing drive modes. The features of the future electric coupe SUV are yet to be unveiled by the company. The Curvv EV will have a battery pack that is larger than the Nexon’s 30.2kWh battery, according to the manufacturer. The company’s production-ready vehicle will have a range of 400-500 kilometres.

Read More: Tata and Honda will both unveil new vehicles next week.