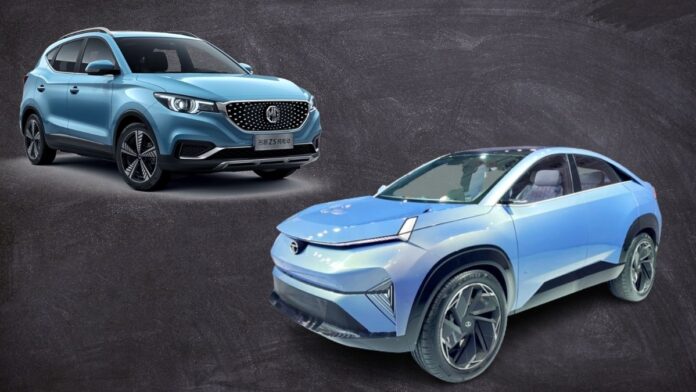 In our market, the recently announced Tata CURVV concept electric SUV will face direct competition from the MG ZS EV. Tata has revealed the design of the e-SUV, which is more in line with the coupe body shape seen on some high-end luxury vehicles. The CURVV will be more agile, adaptable, and advanced than the current EV models that use Ziptron technology, thanks to its Generation 2 EV Architecture. Our Tata CURVV versus MG ZS EV comparison illustrates how the concept stacks up against one of India’s most popular luxury EVs.

While the production-ready version of the CURVV will be unveiled closer to its release date, this concept version appears to be fairly sleek and attractive. There are no traditional headlamps at the front, instead, a long and sleek LED strip runs the length of the bonnet; as an EV, there is no grille, instead of a sealed section; the lower bumper area is finished in black, which complements the blue body color nicely; and the multi-triangular pattern for the fog lamps on the sides of the bumper looks futuristic. The sloping offline dominates the side profile, beautifully integrating into the boot to complete the coupe design. The alloy wheels are athletic and attractive, and the SUV aspect is reinforced by the black side body cladding. Overall, the Tata CURVV electric SUV concept is highly appealing to the eye, and it is unquestionably the winner in this segment of our Tata CURVV vs MG ZS EV comparison.

The MG ZS EV, on the other hand, has the same familiar appearance as the Astor. This is not a disadvantage because the ZS EV’s design is contemporary, especially in the upgraded version. The front features boomerang-style LED DRLs and sleek LED headlamps, an updated front grille area that is now a single part rather than a separate section, plenty of bling with chrome on the lower bumper, door handles, and side body cladding, functional roof rails, and attractive and sporty alloy wheels. The ZS EV’s rear end features split LED taillamps and a chrome-plated skid plate.

The Tata CURVV e-SUV is still a concept, and no details about its specifications have been released. The MG ZS EV, on the other hand, comes with a new 50.3 kWh battery pack that drives an electric engine with 176 horsepower and 353 Nm of peak torque. The ZS EV now has an ARAI-rated range of 461 kilometers, which is extremely useful. This electric SUV accelerates from 0 to 100 km/h in just 8.5 seconds. Ex-showroom, it costs between Rs 21.99 lakh and Rs 25.88 lakh. As a result, we can’t proclaim a clear victor in this segment of our Tata CURVV vs MG ZS EV comparison just yet.

Read More: Anand Mahindra Offers R&D Job To A Autodriver For His Innovation

2023 BMW M3 CS Unofficial Rendering Peels Away The Camo And…