Tata Harrier vs Tata Safari In A Drag Race 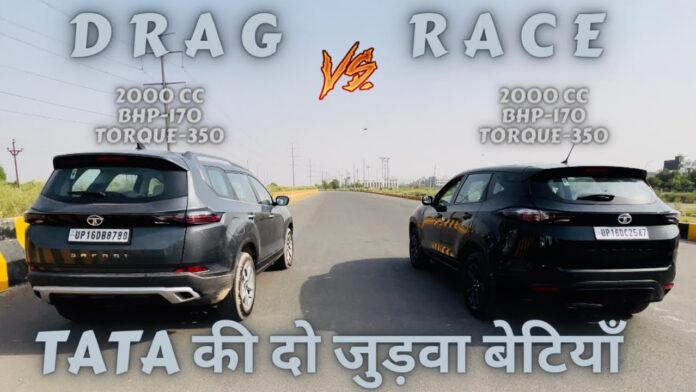 Tata is currently one of the most popular SUV manufacturers in India. Their SUV lineup includes models such as the Punch, Nexon, Harrier, and Safari. Tata Safari and Harrier are both performing admirably in their respective sectors. Harrier was released in 2019 and received a feature update in 2020. In 2021, the all-new Safari, based on the Harrier, was introduced. Several characteristics, notably the engine, are shared by both SUVs. We’ve seen various videos of both SUVs online, and here’s one in which a Tata Harrier competes against a Safari in a drag race.

Rehan Yadav Vlogs has posted the video to their YouTube account. The vlogger discusses the engine specifications of two SUVs in this video, noting that both feature manual transmissions. The Tata Safari shown here is a higher-end model that includes Terrain Response System, although the Harrier in the video does not. Both SUVs were in position for the race. The vlogger is driving a Tata Safari and his companion is driving a Harrier.

They picked a closed road for this race because it is run in numerous rounds. Both SUVs get ready for the race and get started. Both SUVs got off to a strong start. Both SUVs were driving forward jointly since they were powered by the same engine and transmission. Harrier, surprisingly, could only get ahead halfway through the race. After winning the first round, Tata Harrier returned to the starting point for the second round.

The race begins after both SUVs have been lined up. Both SUVs were adjacent to one other in this round, but surprise, the Tata Safari performed well and managed to move away effortlessly and grab the lead. The second round was won by Tata Safari. The Harrier driver turned off the air conditioning and switched to Sport mode for the third round to improve pickup. Safari, on the other hand, was being driven in usual mode with the air conditioning on. The race began, and Tata Harrier, like in the previous round, was unable to win. Safari regained the lead and went on to win the third round as well.

Trending Now:  Top 5 Cars To Buy Instead Of Creta

In the fourth round, the vlogger disabled the air conditioning and switched to Sport Mode in Safari. In Safari’s Sport mode, the traction control cannot be disabled. Both SUVs started racing after the cars were lined up. Tata Safari began to reveal its real colors almost immediately, taking the lead from Harrier. A 2.0-liter turbocharged diesel engine powers the Tata Harrier and Safari. The engine produces 170 horsepower and 350 pound-feet of peak torque. Both SUVs are available with manual and automatic transmissions. Due of the extra row seat in the back, the Tata Safari is slightly heavier than the Harrier.

Safari went on to win the race without incident after that. It’s probable that the Harrier driver didn’t have as much expertise as the YouTuber, and that the traction control in Harrier was disrupting the launch of the car throughout the race.