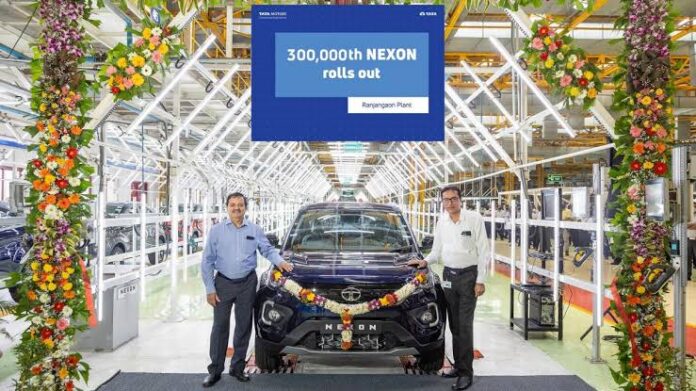 Tata Motors’ Ranjangaon plant in Pune has produced the 3,00,000th Nexon small SUV. In June 2021, the SUV surpassed the 200k units mark, and the final 100k vehicles were delivered in less than eight months. Tata Motors has introduced four new Nexon SUV versions to commemorate the new milestone. The new XZ+ (P) / XZA+ (P) and XZ+ (HS) / XZA+ (HS) variations are based on the top trims and are available in both petrol and diesel, with a new Royale Blue colour option. The #Dark avatar will be available for these new Nexon versions. The business has now begun taking reservations for the new variations.

Mr. Shailesh Chandra, Managing Director, Tata Motors Passenger Vehicles Ltd., and Tata Passenger Electric Mobility Ltd., commented on the achievement, saying, “It is indeed a moment of pride to witness the roll – out of the 3,00,000th Tata Nexon – a landmark product in the turnaround of Tata Motors Passenger Vehicles. Being an integral part of the New Forever range, brand Nexon has successfully established its popularity in the compact SUV segment since its launch in 2017 and has become a part of many families. Adding to the popularity of the ICE variant, the Nexon EV too has created a niche for itself and has gained immense recognition from its customers. The story of building a strong and safe SUV brand started with the Nexon – being the first Global NCAP 5 star rated car in India. Creating benchmarks in safety, Tata Nexon has also been widely appreciated for its striking design, superior ride and handling characteristics, spirited performance, and comfort.”

Additional luxury amenities include Premium Benecke Kaliko Leatherette ventilated front seats, air purifier, and auto dimming IRVM on the new Nexon XZ+ (P) / XZA+ (P) versions. In addition, the new XZ+ (HS) / XZA+ (HS) models come with an air purifier to make the rides safer for the passengers. These extra features will be accessible in their #Dark versions as well.

There are two engine options for the Tata Nexon: a 1.2-litre turbocharged petrol and a 1.4-litre turbocharged diesel. The former has 118bhp and 170Nm of torque, whilst the oil burner has 110bhp and 200Nm of torque. There are two transmission options: a 6-speed manual and a 6-speed automatic manual transmission. The Hyundai Venue, Kia Sonet, Mahindra XUV300, Maruti Vitara Brezza, Renault Kiger, and Nissan Magnite are all competitors.