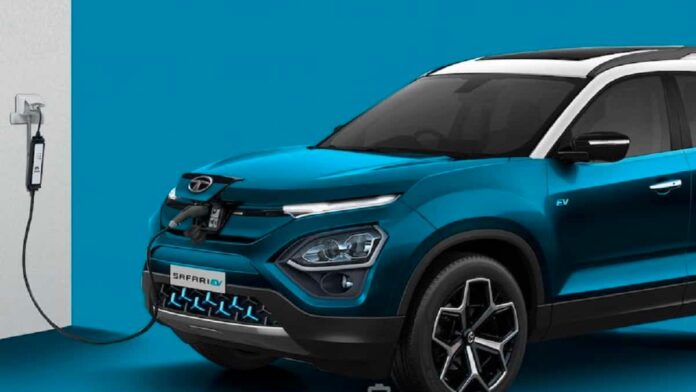 The Auto Expo 2023 is quickly approaching, and with each passing day, interest in the high-profile launches planned for it soars to new heights. Given that the public debuts of the Curvv and Avinya concepts have already been confirmed, Tata Motors is also making big plans for the 2023 Auto Expo. Now, there are rumors that the company’s top-of-the-line SUVs, the Tata Harrier & Safari EV, will also be on display at the 2023 Auto Expo in all-electric form.

The all-electric versions of the Tata Harrier and Safari EV will take the same path Tata Motors did for the Nexon EV, Tigor EV, and Tiago EV based on their current iterations. This means that Tata Motors will keep the platforms and body designs of the current Harrier and Safari models and that their cabins will be the same as the versions with IC engines. However, their engines will see a significant change. The 2.0-liter diesel engine shared by both SUVs, which is sourced from FCA, will be replaced by an all-electric drivetrain that consists of a lithium-ion battery and an electric motor driving the front wheels.

Although the electric motor and battery powering the EV versions of the Tata Harrier and Safari are not yet known, it is anticipated that these all-electric SUVs may have a stated range of 500-520 km, which translates to a real-world range of 450-475 km. The market for all-electric midsize SUVs will see increased competition if these two electric SUVs are released.

The 2.0-liter diesel engine, which has a maximum output of 170 PS and 350 Nm, is the sole engine available for the Tata Harrier and Safari at the moment. Both Harrier and Safari have two transmission choices: a 6-speed manual and a 6-speed automatic. Additionally, it is anticipated that these two new SUVs will receive a facelift, which will include minor changes to the front and rear profiles as well as a few new features like an improved infotainment system and a comprehensive ADAS package. The facelifted Harrier and Safari models may serve as the basis for the all-electric versions, which will keep the same feature set as the SUVs’ diesel-powered counterparts.

Launching the all-electric versions of these two SUVs will increase the lineup and powertrain options available to customers since Tata Motors has made it clear that the Harrier and Safari may not receive a petrol powertrain.

Toyota GR Corolla Hatchback To Be Displayed At 2023 Auto Expo