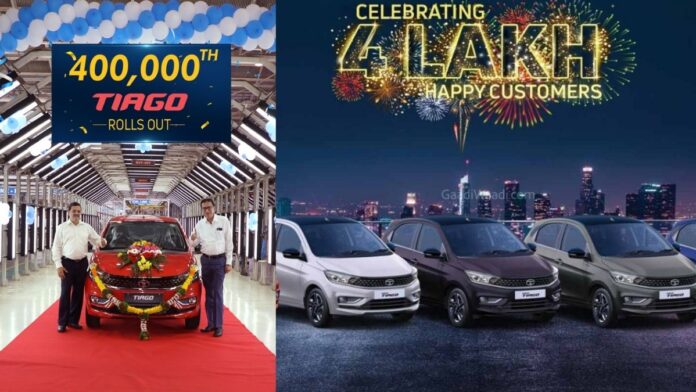 Tata Motors announced today that the Tiago compact hatchback has surpassed the four lakh mark in sales. The brand’s Sanand factory in Gujarat has produced the 4,00,000th item. Tata has launched the #Tiago4ever celebration with its employees and customers throughout its offices, customer touchpoints, and manufacturing sites as part of the celebration.

With a new brand image and perception, Tiago is credited with turning the tide in Tata Motors’ favor. When it debuted in early 2016, the five-seater kicked off the Impact Design philosophy and is one of the safest entry-level hatchbacks money can buy, earning a four-star Global NCAP safety rating. It also spawned a sedan counterpart in the form of the Tigor.

The Tiago, according to the firm, has won more than 30 honours over the years and is available in 14 different varieties in the normal Tiago and Tiago NRG specs. Rajan Amba, Vice President, Sales, Marketing, and Customer Care, Tata Motors Passenger Vehicles Ltd, commented on the achievement:

“This is a historic milestone for Tata Motors, as Tiago is the first car to achieve this feat in such a short period of time.” Tiago has been a crucial product in our Turnaround 2.0 plan, and it has been effective in capturing a significant market share in the auto industry’s most crowded segment since its launch.”

The company also stated that first-time consumers account for more than 60% of all sales, and that it has a 19% market share in its segment. It is powered by a 1.2-litre three-cylinder Revotron petrol engine, and a CNG model was recently added to the range to round out the lineup.

Dual airbags, Anti-lock Braking System (ABS), Corner Stability Control (CSC) & Electronic Brakeforce Distribution, reverse parking aid, and other safety features are among the highlights. A touchscreen infotainment system, a steering wheel with mounted controls, adjustable headrests, keyless entry, a cooled glovebox, and other conveniences are included in the interior. Direct CNG Start and Single ECU are among the features of the iCNG.

Tata Altroz Rolls Twice In A Accident – Keeps Everyone SAFE