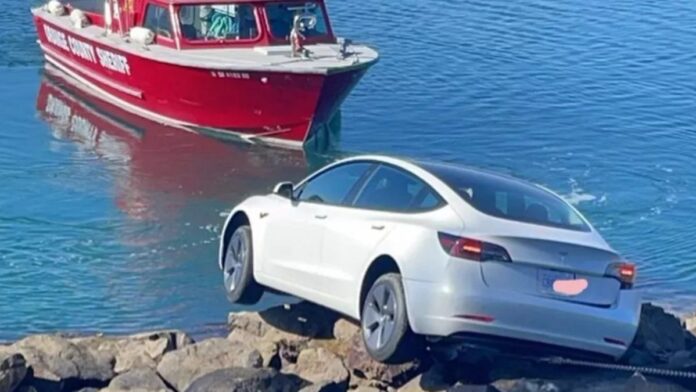 Last weekend, the driver of a white Tesla Model 3 came dangerously near to driving into the Dana Point Harbor in Orange County, California.

When parked at the port, the driver of the Model 3 mistakenly accelerated rather than hitting the brakes, according to the Orange County Sheriff’s Department. The driver didn’t have time to remedy their error because of the Model 3’s quick power and torque, and the Tesla ended up traveling over a number of huge pebbles heading to the water’s edge.

Local police used a chain to pull the Tesla off the ledges, as shown in these images.

There are no images or specifics regarding the extent of the Tesla’s damage, but we believe the front end took a beating when it initially drove into the rocks. Furthermore, during the car’s unanticipated off-road adventure, the undertray is likely to have been damaged, and it’s not impossible that a rock may have entered the underbelly and destroyed the battery. Even if that isn’t the case, restoring the EV will very certainly be prohibitively expensive.

It’s typical for drivers to mix up the brake with the throttle. According to data from the National Highway Traffic Safety Administration, pedal confusion causes around 16,000 crashes each year in the United States, according to Road & Track.