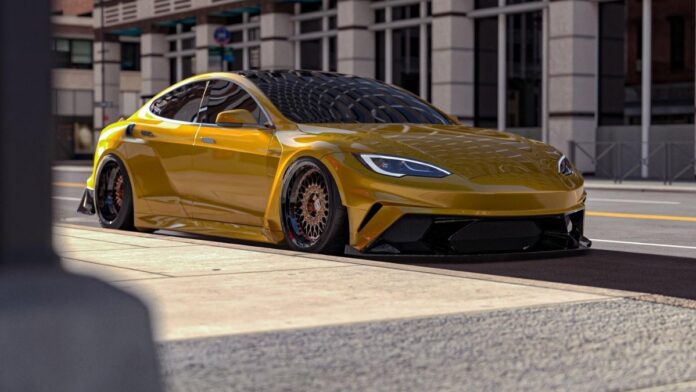 Although the Tesla Model S Plaid is the fastest car on the market, it doesn’t exactly stick out in traffic. In fact, it resembles lower Model S variations virtually identically. As a result, it’s an excellent sleeper but not a head-turner. Competition Carbon is a solution to this problem.

Back in late 2020, the aftermarket specialist caught our attention when it revealed a radical carbon fibre bodykit for the C8 Corvette. Fast forward to 2022, and the business has unveiled their newest project, a widebody package for the Model S Plaid that will be unveiled at the SEMA Show in Las Vegas this year.

The final project has been depicted in a number of renderings. The revamped front fascia, which comprises an unique bumper with redesigned air intakes and a massive front splitter, kicks off the alterations, giving the Model S Plaid a considerably more aggressive aspect.

With expanded front and rear wheel arches, as well as enlarged side skirts, Competition Carbon’s enhancements continue down the sides. The EV has also been fitted with aftermarket wheels with tight spokes and the ride height has been decreased.

A series of adjustments to the car’s rear end complete the enhancements. A huge lip spoiler and a redesigned bumper with an overt carbon fibre diffuser are among them.

It’s unclear whether Competition Carbon plans to sell this widebody kit or whether it will be a one-off. If the package is supplied to Model S Plaid owners, it won’t be cheap, but it accomplishes the job in terms of giving the EV the outward aesthetics of more muscular sedans like the BMW M5 CS.

Facebook
Twitter
Pinterest
WhatsApp
Email
Tumblr
Telegram
Previous articleWhy Does This 2022 Nissan Frontier Pro-4X Have Mismatched Stickers?
Next articleThis 1995 BMW M3 GT Is One Of Just 50 In The UK – And It Goes For $117K