This Fully Kitted Out Has One Feature Unlike Any Other Thar 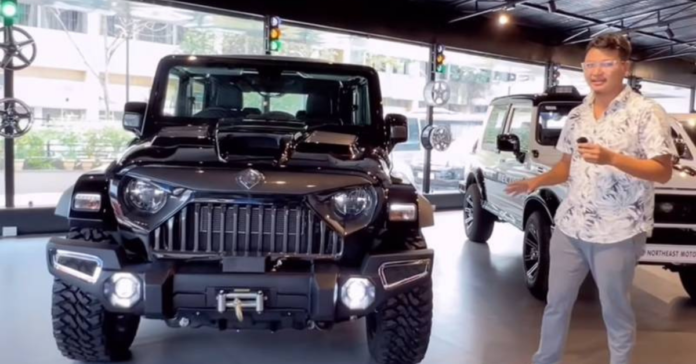 The second-generation Mahindra Thar has become a hit by following in the footsteps of its predecessor in a more modern guise while still offering limitless customization options. We’ve seen a number of Thar mods, the majority of which try to improve the visual appeal of this already tough-looking extreme off-road SUV.

We came across this beautifully customised Mahindra Thar from North East Customs in Assam, which claims to be the country’s first Thar with an aftermarket panoramic sunroof. In a YouTube video by ‘All In One Entertainment,’ the exact features of this substantially altered hard-top version of the Mahindra Thar are described.

The Mahindra Thar is offered in two models, one with a soft-top convertible roof and the other with a factory-installed hard-top. The SUV’s hard-top has been substantially modified with new sheets and bolts to allow the enormous dual-pane panoramic sunroof, with the glass part above the front row being openable, as seen in the video. Between the circular AC vents in the centre console is a switch that opens and closes the half of the sunroof. This aftermarket item, like the factory-installed panoramic sunroofs in other premium SUVs, comes with a curtain to shield the cabin from the sun’s heat.

North East Customs has done a fantastic job visually making it a butch attention magnet. With an aftermarket aggressive-looking grille, heightened wide hood scoop with side air vents, customised off-road-spec front bumper with integrated winch and LED fog lamps, and LED projector headlamps with daytime running LEDs, the Mahindra Thar has undergone a drastic transformation on the outside.

The simulated carbon fibre finish can be seen on the grille’s upper lip and slats, headlight housings, upper parts of the hood scoop, side air vents, exterior rearview mirrors, and door handles. Custom 18-inch black alloy wheels with Maxxis off-road tyres and custom footsteps on both sides are fitted to this Thar.

When you go inside this modified Mahindra Thar, you’ll see the cabin has been spruced up with faux wood inlays on the door armrests, inner door handle surrounds, steering wheel, and upper and lower centre consoles. Artificial leather covers the inside, with a perforated finish above and on the centre console. Custom leather covers are also being applied to the seats. Turbine-style circular AC vents with changeable lights in conjunction with the aftermarket ambient lighting are standard on this Thar.