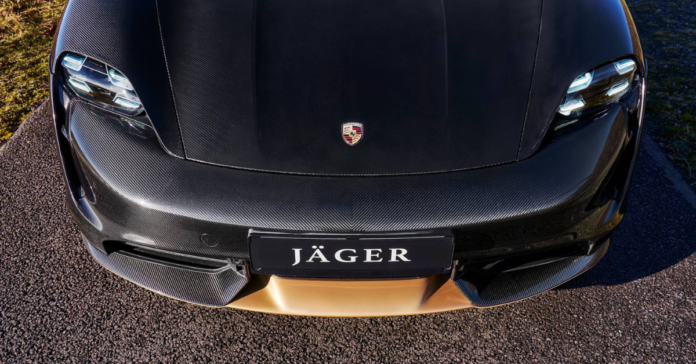 Due to the increased weight of the battery, electric vehicles are naturally heavier than combustion-powered vehicles. Consider the Taycan, Porsche’s electric vehicle, which weighs between 2,140 and 2,350 kilogrammes (4,717 – 5,081 pounds). If you don’t think that’s a lot, consider that a Ram 1500 pickup vehicle weighs 4,798 pounds! Although Porsche was able to compensate for the added weight with increased power, the Taycan remains on the fat side of the scale.

As electric cars become more popular, more tuners will aim to improve their appearance, output, and range. Take, for example, the Taycan, which has lately got an excellent makeover from Brabus. The question is: how can an electric car be made lighter while maintaining its performance? The boys at Jager might be able to help you out. They’ve spent over a decade making their customers’ cars more stylish and sportier, so why not make them lighter as well?

The Jager’s upgrade includes a carbon fibre exterior package. Almost every aspect of the Taycan’s exterior has been altered. It began with a new hood, then progressed to new front fenders and side skirts. The front and back aprons, as well as the rear spoiler, were all given the same treatment. Rear carbon has been added to the frunk as well. The tuner next moved on to the small details, such as the mirror covers, both tank nozzles, and the front and back door handles, which are all constructed of carbon fibre. The Jager’s Taycan will be finished off with a new set of custom in-house built forged wheels, measuring 9.5×21 up front and 11.5×21 in the back.

The weight of the Taycan was reduced by about 45 kilogrammes (about 100 pounds) as a result of these modifications. While it may not appear to be much, Jager argues that it will enhance efficiency and performance.