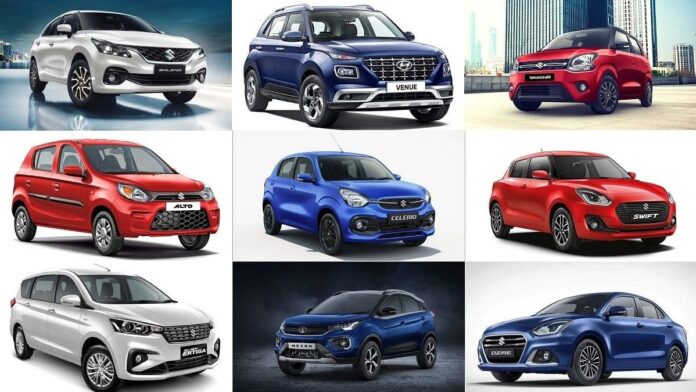 With 2,21,850 units sold during the year 2022, Maruti Suzuki’s WagonR won the competition for overall passenger vehicle sales. For many years, the domestic market has been dominated by the tall-riding entry-level hatchback. The WagonR currently uses 1.0- and 1.2-liter petrol engines with DualJet Dual VVT technology and idle start/stop functionality.

With 1,85,665 units sold, the Baleno was the second-most popular car in India last year. In 2022, the premium hatchback underwent a significant redesign that included a completely new exterior and an interior with more upscale materials and modern features. The new model has undoubtedly contributed to its sales surpassing those of competitors.

With 1,76,424 units sold, the Maruti Suzuki Swift came in third place. The small hatchback continues to post steady sales and has been the undisputed leader in its market. Only 2024 is anticipated for the release of the next-generation Swift with a hybrid drivetrain. The fourth-place finisher was the Tata Nexon.

Also Read: Honda, Mahindra To Discontinue These 8 Models By April 2023

With 1,68,278 sales last year, the compact SUV was the most popular SUV in the nation. The Nexon debuted on the market back in 2017, and in early 2020 it underwent a significant update. The compact SUV has a wide range of potent gasoline and diesel engines, as well as a tonne of features, and it has a five-star Global NCAP safety rating to top it all off.

With 1,62,548 units, the Maruti Suzuki Alto could only manage to take fifth place. However, the introduction of the Alto K10 could help this year’s volume total improve. With 1,59,919 unit sales, the Maruti Suzuki Dzire came in sixth overall in the second half of the table, surpassing the Hyundai Creta.