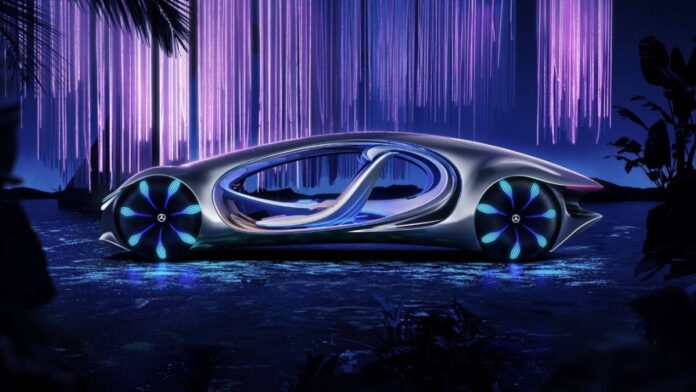 The year 2020 is a rough year for every car manufactures, but they have built some epic cars that include Mercedes AVTR, Faraday Future, Bwm Hommage, Lamborghini vision, and many more.

Everyone loves supercars with roaring engines at high rpm, but things have changed a bit for the upcoming cars. The world is looking toward electric vehicles that are efficient and environmentally friendly. With that, the technology of cars has peaked at the next level beyond imagination.

The next concept car is from California, USA. The Faraday Future is an American start-up tech company focused on the development of electric vehicles, founded in 2014. FFzero1 is like an alien spaceship that has a glass helmet that you need to wear while driving. The Driver’s seat is inspired by NASA’s Zero Gravity Design.

This is a concept car with no doors. This is a BMW racecar inspired by 80s racing BMWs. This car has all those flicks and elements that those cars had. Also, the Hommage is loaded with technology and advancements giving it a future car retro look.

This car can do something that has never any done before. It’s actually can extend itself from the front as well as back. This will help you fit in an extra battery pack from a Roadside Renault Battery station. It provides you with more room as well. To get into this car it is also as face recognition, well it also has gesture controls.

The car is the second BMW concept car which also named Hommage. Unlike the previous car, this car has a fitted roof and looks like a GT racer. This is a concept car that has 500 horsepower engine which sounds amazing. From the front, the car headlights have an “X” design on them. Which represents the headlights of the 80s racecars.

This is the longest convertible car ever made. As the name says this car is 6 meters long i.e. 19.7 ft. The sideline of the car looks like a Yacht to give in a luxurious look. The interior of the car is pure white with a rose gold accent. It’s a two-seater car that means it’s a car to drive and not to be driven.

The next concept car is actually a game car, which is built for reality as well. This car was built in collaboration with Citroen and a Japanese Racing Simulation developer Polyphony for the game called Grand Turismo 5.

This was a top-secret car that was never revealed to the market by Bugatti. It’s a secret Bugatti that was never made. For this time they have moved the engine to the front of the car. As the engine is at the front it would have a twin-turbo V8 or a fully electric car.

One of the most unbelievable technology is been used in this concept. This car acts as an actual living creature. The design of the car is inspired by the movie Avtar, and you can see those accents all over the car. The interior of the car is made from non-animal products.

Here we come to the top of the list, and this car is also designed for the video games Grand Turismo. Lamborghini designers have pushed them beyond the imagination and made an amazing-looking car. This car will be an electric hypercar. In-game the performance of this car is 2.6 secs from 0- 100 kph. And the price for it is $3.6 million USD and only 63 units of these will be ever made.