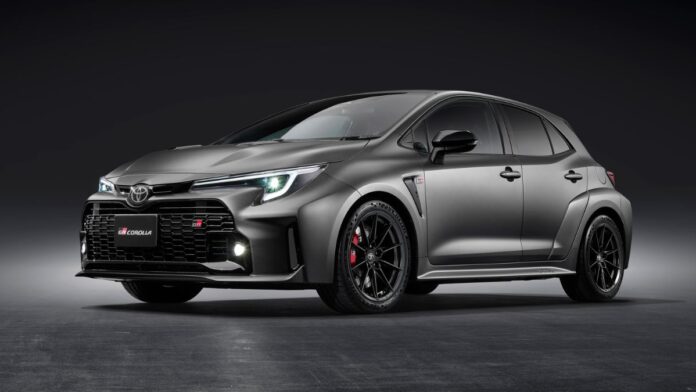 Toyota has recently increased its level of aggressiveness in India. Toyota has introduced brand-new products over the past two years, including the Fortuner Legender, Hilux, updated Glanza, Vellfire, Urban Cruiser Hyryder, and Vellfire. It also celebrated the end of 2022 by introducing the brand-new Innova Hycross. At the upcoming Auto Expo 2023, Toyota wants to make a splash by introducing the GR Corolla performance hatchback to the Indian public.

The four-door Toyota GR Corolla performance hatchback will be on display at the 2023 Auto Expo, according to Toyota. For the first time ever, Toyota will publicly display a Gazoo Racing (GR) product in India. The GR Corolla’s absence from this location with the intention of being launched, however, has also been confirmed. Instead, the item will be on display to monitor consumer reaction to Toyota’s performance sub-brand.

The Toyota GR Corolla is based on the regular Corolla hatchback and keeps its four doors and TNGA platform. There are some design modifications and additions, though, including gloss black accents, a larger front grille with various air intakes, flared wheel arches, air ducts on the bumpers, a noticeable rear diffuser and spoiler, and sportier-looking alloy wheels. The GR Corolla’s interior features leather-wrapped GR seats, pedals, and a steering wheel.

Gazoo Racing Performance has made significant changes to the Toyota GR Corolla’s mechanicals, including a highly rigid body made up of additional welds around the chassis joints and more extensive use of adhesive between components. The GR Corolla hatchback weighs less than the regular Corolla, though, as a result of the extensive use of lightweight materials to maintain the highest possible power-to-weight ratio.

The Toyota GR Corolla is propelled by a 1.6-liter three-cylinder turbocharged petrol engine with a maximum output of 304 bhp and 370 Nm. The Toyota GR Corolla also features larger exhaust valves, a multi-oil jet piston cooling system, a triple-exit exhaust note, and a part-machined intake port for an even sportier driving experience. An all-wheel drive system and a 6-speed manual transmission with a rev-matching feature come standard with the engine.

Toyota will display additional products at the Auto Expo 2023 in addition to the GR Corolla, including some of its globally accessible hybrid, plug-in hybrid, and fuel-cell vehicles. bZ4X, Toyota’s first all-electric SUV, is rumoured to be on display at the Auto Expo.