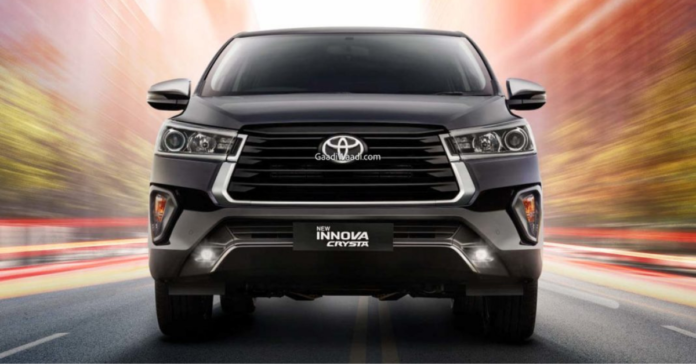 In the country, MPVs are in high demand. Since its launch, the Maruti Suzuki Ertiga, which recently received an update, has dominated the segment. However, in March 2022, the Toyota Innova Crysta dethroned the Ertiga as India’s best-selling MPV. Toyota’s premium MPV sold 7,917 units in February 2022, up from 4,318 units in February 2021, representing an increase of 83.34 percent.

Read More: Toyota Crown Will Reportedly Be a New Hybrid SUV for the U.S

The new-generation Innova Crysta is expected to hit Indian roads in 2023, according to the Japanese automaker. The new model, though, will make its global premiere at the end of this year. The 2023 Toyota Innova Crysta, codenamed B560, might be the foundation for the brand’s low-cost DNGA (Daihatsu New Generation Architecture) or FWD DNGA modular platform.

The new generation is predicted to be slightly shorter than the existing one. The Toyota Avanza, which is already on the market in Thailand and Indonesia, is expected to form the basis for the new Innova Crysta. The India-spec model will, however, receive a few cosmetic tweaks.

Trending Now:  The Introduction Of The New Smart #1 Electric Crossover Has Been Set For 2022

The Toyota Innova Crysta will be available with hybrid powertrains in Indonesia starting in 2023, according to the automaker. In India, the MPV could be equipped with the same powerplant. It currently comes with two engine options: a 148bhp 2.4L turbo diesel and a 164bhp 2.7L naturally aspirated petrol. A 5-speed manual and a 6-speed torque converter automatic unit handle the transmission tasks.