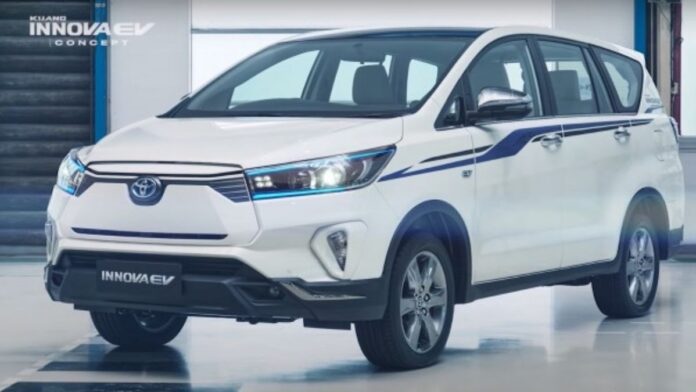 At the ongoing Indonesia International Motor Show in Jakarta, Toyota has astonished us all by showing the Innova Electric Concept. The Japanese automaker is pouring money into electrifying existing vehicles and developing new electric vehicles. It’s crucial to remember that Innova Electric is still in the idea stage, so we don’t know how much it will cost or when it will be available. In truth, Toyota has yet to announce whether or not this version of the Innova Electric will be produced. Because it is still in the concept stage, no information on the electric motor, battery, or range has been released.

According to media rumors, Toyota is already working on a new generation of Innova, thus the electric version came as a surprise. The new-generation Innova has been observed on both foreign and Indian highways.

When we look at Innova Electric, we can’t tell it apart from the ordinary Innova Crysta that is currently on the market in India. The EV version is done in white with blue accents, while the standard version is finished in black. For a more streamlined airflow, the front grille has been closed. The headlamps and taillamps have also received minor updates.

Toyota has also modified the design of the Innova Electric’s alloy wheels. At the back, there’s also an Electric badge. The MPV’s charge point is now housed in the petrol lid. The inside is similar to that of the standard Innova Crysta. However, Toyota has updated the instrument cluster and infotainment system to include data on the batteries, range, and other factors. Innova EV is written on the headrests.

B560 is the codename for Toyota’s forthcoming new Innova generation. The test mules appear to be modelled after the Toyota Avanza. The test mules were first discovered in Thailand, and they have now been discovered in India. We predict it to be shown by the end of 2022 or the beginning of 2023.

Innova has been based on the IMV platform, which is a ladder frame platform, up till today. The Toyota Hilux and Fortuner are both built on the same basis. Toyota is anticipated to switch to a monocoque chassis based on the DNGA modular platform this time around. DNGA stands for Daihatsu New Global Architecture.

Toyota was said to be working on hybrid technology for their diesel engine last year. The hybrid system is likely to be used by the Japanese company to reduce emissions. Furthermore, in some countries, the hybrid diesel engine might assist in obtaining tax benefits.