The TVS Apache RTR 200 4V is one of the most feature-packed, performance-oriented motorcycles in the 200cc space. It is armed with segment-first riding modes and adjustable suspension, making it a perfect choice for enthusiasts who are looking for a sporty naked.

The TVS Apache RTR 200 4V is the most feature-packed motorcycle in its segment. It gets fuel injection, LED headlight with DRL, Glide Through Traffic technology, smartphone connectivity, along with three riding modes — Urban, Rain, and Sport. You can go from one mode to the other using a dedicated button on the right switchgear. The acceleration, top speed, and ABS intrusion vary according to the riding modes. The gearshift prompts also differ depending on the mode. For instance, in ‘Sport’, the upshift and downshift prompts come at 8500rpm and over 6000rpm, respectively. The bike also gets a three-step adjustable brake and clutch levers.

SmartXonnect lets you connect your smartphone to the motorcycle’s console via Bluetooth, lending access to call and SMS alerts, turn-by-turn navigation, and other vehicle diagnostics messages. Post the ride, you can also check the analytics of your past ride, lean angles, and G-forces experienced.

The ‘Glide Through Traffic’ feature on the Apache 200 comes in handy when you are navigating through traffic-riddled roads. The ECU bumps up the revs slightly to prevent the bike from coming to an abrupt halt. This is similar to the feature that you get on Suzuki’s big-capacity motorcycles.

The TVS Apache RTR 200 4V features the first-in-segment preload-adjustable Showa telescopic front fork and a rear Showa monoshock. Braking hardware comprises a 270mm front and a 240mm rear petal disc with either a dual-channel or a single-channel ABS. TVS also offers an optional radial tyre at the rear. 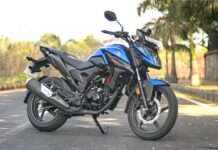 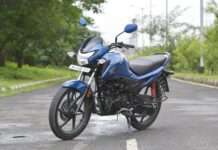