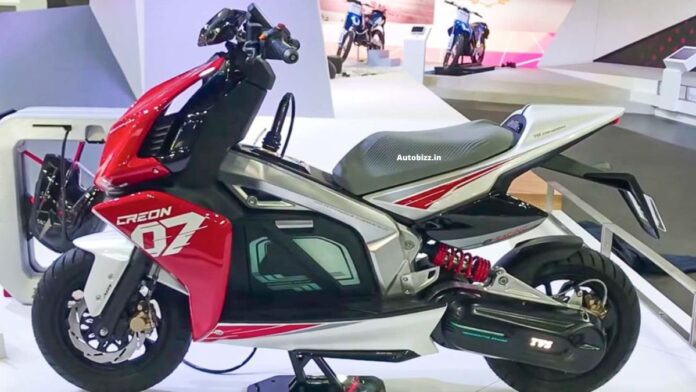 According to a spy image that surfaced on the internet, the TVS Creon was one of the most promising ideas ever exhibited at the Auto Expo, and it looks like it has generated a production vehicle. It is no secret that TVS aims to invest heavily in expanding its electric scooter line in the nation, and the forthcoming range might include a production Creon.

The Hosur-based business already offers the iQube electric scooter in India, and its series was recently updated with new features and a greater battery range. The spy photographs allegedly captured in Bengaluru have a similar appearance to the Creon idea, and it may sit above the iQube in the future.

It may have larger dimensions than the iQube, and the test mule suggests the presence of a sportier maxi-scooter-like appearance as compared to the former’s sleek profile. While the rearview mirrors appear to be lifted from the iQube, the aggressive front end has a curving apron section, a floating oval-shaped digital instrument console, muscular side panels, a stepped-up bench, and a grey polished grab rail.

The rider sat relaxedly on the prototype, gripping a broad handlebar, and the footboard is intended to be spacious as well. The TVS Creon in its conceptual version was outfitted with three Lithium-ion batteries capable of providing 12 kW of electricity. It was claimed that it could accelerate from 0 to 96 kph in 5.1 seconds. The design featured an 80-kilometer range on a single charge, and a fast charger could recharge it to 80% in just 60 minutes.

You May Like:  Top 6 Cars For Students In Canada

It’s too early to tell what the production model will have, but it might include a larger battery pack for a greater riding range than the iQube, which has a stated range of up to 145 km in the top-tier ST trim. It might have all-around LED illumination and a massive under-storage capacity.

In true TVS tradition, we can anticipate the next electric scooter to be loaded with amenities as well. The TVS Creon-based zero-emission scooter will most likely receive the most recent SmartXonnect connection, which includes capabilities like geofencing, navigation, tracking aid, and so on.