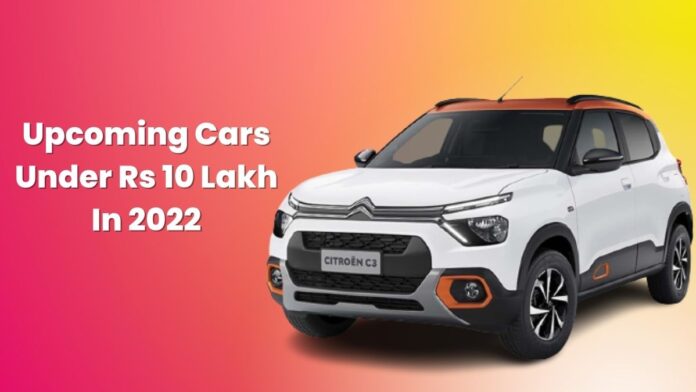 Automobile prices in India have increased numerous times in recent years, making it increasingly difficult to purchase new vehicles. A majority of purchasers still prioritize affordability, which is why many automakers are aiming to release more budget-friendly vehicles in our market this year.

Here are seven upcoming cars that will be launched in India this year, i.e. in 2022, at a starting price of less than Rs. 10 lakh (ex-showroom).

Maruti Suzuki is working on the next-generation Alto, which has been sighted on Indian roads several times during road testing. The new model will have a more angular form than the previous generation, and it will be slightly larger in size, which should increase internal space.

According to rumors, the next-generation Alto will be built on Maruti Suzuki’s Heartect platform. The present 0.8L petrol engine is expected to be retained with a few tweaks in terms of powertrain options. There will also be a CNG option available.

The Hyundai Venue is due for a facelift soon, and test vehicles of the new model have been spotted both globally and in India. The Venue will get a new front fascia inspired by the new-generation Hyundai Tucson, as well as restyled taillights and bumpers (front and rear).

The SUV’s inside will most likely remain unchanged. The facelifted Hyundai Venue will be available in India with the same three engine options – a 1.2L NA petrol engine, a 1.0L turbo-petrol engine, and a 1.5L turbo-diesel engine – as well as several transmission options.

In the next months, Maruti Vitara Brezza will receive a big makeover, and the new model is expected to eliminate the ‘Vitara’ suffix from its name. Spy photos of the 2018 Brezza have already appeared online, revealing significant outward and interior design changes. The SUV will also receive a slew of new features.

The 2019 Maruti Brezza will be driven by the company’s new K15C engine, which is a 1.5-liter NA petrol engine with 115 PS of peak power and a mild hybrid system as standard. A 5-speed manual transmission and a new 6-speed automatic transmission will be available, with the latter featuring steering-mounted paddle shifters.

Toyota will debut the revised Urban Cruiser in India following the launch of the updated Maruti Brezza. The new Urban Cruiser will have a completely new design (both exterior and inside) and an updated equipment list as compared to the existing model.

The revised models of these two SUVs will be mechanically comparable to the existing Vitara Brezza-Urban Cruiser combination, with some cosmetic alterations to differentiate them. Toyota’s tiny crossover will receive a more powerful 115 PS 1.5-litre NA petrol engine as part of the update.

Citroen’s compact crossover, the C3, will be available in India very soon. Last year, Citroen C3 was presented in our country, with a unique appearance and interior design inspired by the C5 Aircross. It will be built on the CMF platform and will be 90% localised to keep expenses down.

The Citroen C3 will have two engine options: a 1.2L normally aspirated petrol mill and a 1.2L turbocharged petrol mill. It will compete with vehicles such as the Nissan Magnite, Renault Kiger, Tata Punch, and others when it debuts.

Mahindra & Mahindra has a slew of new models in the works, including both electric vehicles and cars with internal combustion engines. The company plans to debut an EV based on the KUV100 (eKUV100) in India by the end of the year, making it the country’s most cheap electric vehicle.

The Mahindra eKUV100 was shown in the near-production form at the 2020 Auto Show, with a 15.9 kWh lithium-ion battery pack and a 40 kW electric motor. The EV’s interior and exterior design will be identical to the petrol-powered KUV100 NXT, with minor differences such as new badging and various interior trims.