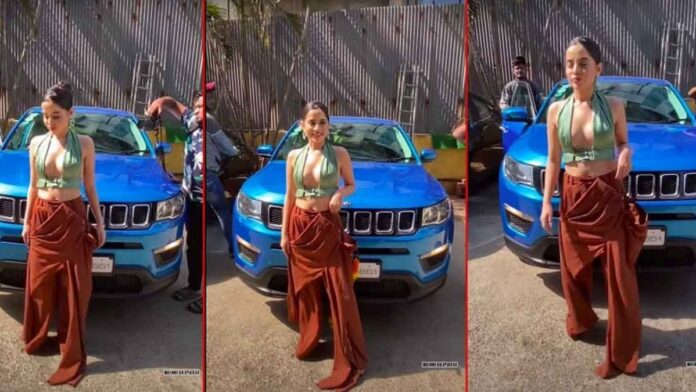 Urfi Javed is a television actor who has been in shows such as Punch Beat Season 2, Meri Durga, Bade Bhaiyya Ki Dulhania, and Bepannaah. She recently purchased a new Jeep Compass SUV.

The SUV is painted in a Hydro Blue color scheme that is not available on the facelifted model. This indicates Urfi has purchased a used Jeep Compass. Because the Compass is a more upscale SUV than other mid-size SUVs, it has a greater presence on the road.

Last year, Jeep released a facelifted version of the Compass. There were no technical changes, but there were a number of new features and significant visual alterations. The Compass is priced from Rs. 18.04 lakhs ex-showroom and goes up to Rs. 29.59 lakhs ex-showroom.

The exterior of the Jeep Compass has been changed, including a thinner LED headlamp with revised LED Daytime Running Lamps, an updated seven-slat grille, a new front bumper and fog lamp housing, and new alloy wheels.

The interior of the Compass has also been altered. It receives a new dashboard design that appears to be more vital. The new 10.1-inch touchscreen entertainment system, which has a floating design and supports Android Auto and Apple CarPlay, necessitated a change in the dashboard arrangement. Leather dashboard inlays with stitching, a new three-spoke steering wheel, and a new digital instrument cluster are all included.