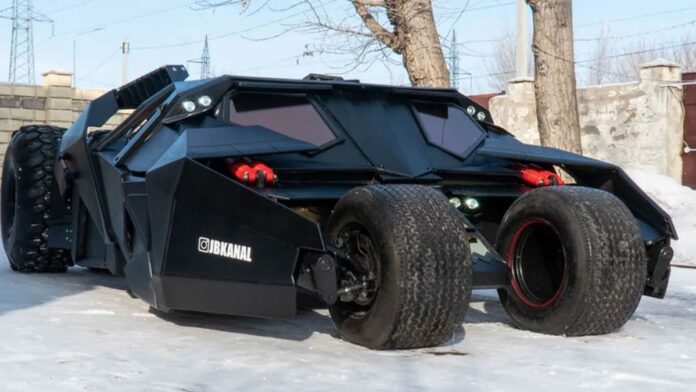 The Tumbler, which debuted in 2005’s Batman Begins, is one of the most well-known iterations of the Batmobile, as well as one of the most popular for fans to recreate. A replica of this is now for sale.

This specific Tumbler is for sale on Exotic Car Trader and is currently situated in Kazakhstan, of all places. The listing doesn’t go into depth about the construction process that went into making this Tumbler replica a reality, or if it was created from the ground up or is based on a conventional production automobile. Whatever the situation may be, it appears to be somewhat bizarre.

This replica includes two front wheels and four rear wheels, much like the original Tumbler from Batman. The front tyres are Mickey Thompsons, while the rear tyres are designed for off-road use. The vehicle’s unusual exterior is coated in matte black to give it a menacing and purposeful appearance.

The bodywork, on the other hand, was almost certainly created entirely by hand and does a good job of emulating the actual thing. Sure, the pieces don’t look to be as detailed as the movie automobile, but hand-crafting these panels would not have been simple.

The Tumbler replica’s cabin features a minimalist dashboard with two displays in place of typical wing mirrors and a third screen for the rear-view camera. The car is also controlled via simple gauges and switches, as well as a tyre pressure monitoring system.

A naturally aspirated Toyota V8 is found beneath the skin, mated to an automatic gearbox that drives the four rear wheels. There’s no indication of the car’s speed, but considering its size and mass, we wouldn’t expect it to be especially swift.

What about the cost? This Tumbler duplicate, on the other hand, will set you back $399,000.