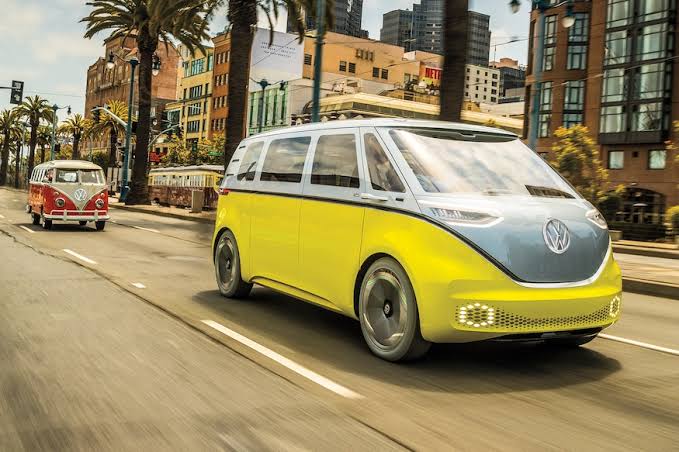 In Hamburg, Germany, Volkswagen has unveiled the production version of its highly awaited electric microbus or MPV, the VW ID. Buzz. The new, electric version of the legendary VW Bus, set to be on sale in Europe later this year, will be available in two versions: the ID. Buzz for passengers and the ID. Buzz Cargo for commercial vehicles. The ID. Buzz, like the rest of Volkswagen’s ID. family of electric vehicles, is based on the Group’s Modular Electric Drive Kit (MEB) architecture and is Europe’s first all-electric bus and transporter line.

Volkswagen Passenger Cars Chairman of the Board of Management Ralf Brandstatter said, “In the 1950s, the Volkswagen Bulli stood for a new feeling of automotive freedom, independence and great emotion. The ID. Buzz picks up on this lifestyle and transfers it into our time: emission-free, sustainable, fully networked and now ready for the next big chapter: autonomous driving. With this car, we are bringing together the core themes of our ACCELERATE strategy in one product for the first time.”

Both the ID. Buzz and the ID. Buzz Cargo are equipped with a 77 kWh battery (gross energy content 82 kWh) and a 150 kW or 201 horsepower electric motor that drives the back axle, much like the flat engine did in the T1. For improved weight distribution, the battery is buried deep in the sandwich floor. The lithium-ion battery may be charged using an 11 kW AC wall charger from wall boxes or public charging stations, but it also allows DC rapid charging up to 170 kW. The battery can be charged from 5% to 80% in around 30 minutes using a DC charger. The location of the driving range is yet to be announced.

The ID. Buzz was inspired by the VW Bus T1 model from the 1950s in terms of appearance and design. The EV has short front overhangs and the trademark V-shaped front panel in the middle, as well as modern LED headlights. You also get a set of EV-style wheels, as well as a distinctive diamond pattern grille that produces the illusion of pixelation. The narrow smoked LED taillights are joined by an LED bar in the boxy back area. VW also provides two-tone paint as an option. The cabin design, on the other hand, is contemporary, with a retro colour scheme. The huge central touchscreen, digital instrument cluster, flat-bottom steering wheel, and other modern features are all included. VW even claims to have utilised recycled synthetic materials and that there is no actual leather in the interior.

Both models have a length of 4,712 mm, a width of 1,985 mm, and a height of at least 1,937 mm. They do, however, have the same 2,988 mm wheelbase. The passenger version has a 5-seater interior with 1,121 litres of luggage capacity, which can be extended to 2,205 litres by folding the rear seats. Two or three front seats are available in the cargo version, with a fixed partition separating the 3.9-metre luggage space. Carsten Intra, Chairman of the Volkswagen Commercial Vehicles Brand’s Board of Management, comments, “The ID. Buzz will also be used for future autonomous mobility concepts such as ride pooling – an e-shuttle service of Group subsidiary MOIA that can be booked via an app. The electric Bulli is thus also a part of the future of inner-city transport.”

Both the ID. Buzz and the ID. Buzz Cargo are equipped with the ‘Car2X’ local warning system, which uses signals from other cars and the transportation infrastructure to detect risks in real time. The vehicle also comes equipped with a ‘Front Assist’ emergency braking system and a ‘Lane Assist’ lane-keeping assistant. ‘Travel Assist with swarm data’ is also available on the top-end trim, allowing for partially automated driving across the whole speed range and, for the first time, assisted lane-changing on the highway. The ‘Memory Function,’ which allows for autonomous parking on a previously saved route, is also new.